SoFi Stadium is looking to hire about 1,200 to 2,000 people for various jobs at the stadium.
KABC
By Ashley Mackey 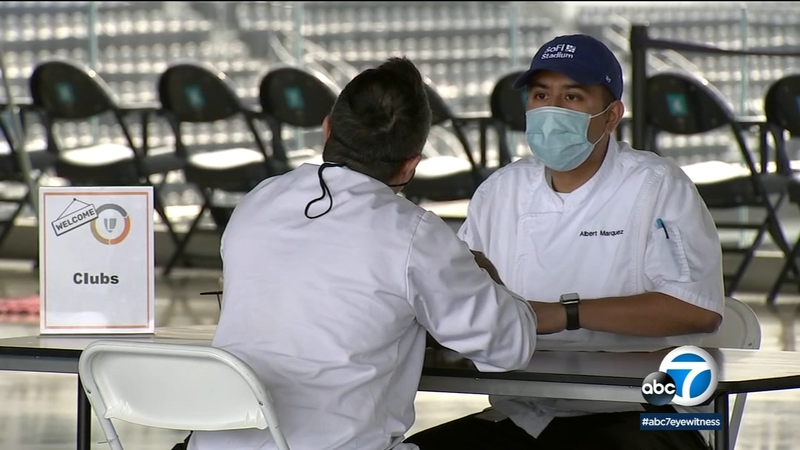 INGLEWOOD, Calif. (KABC) -- SoFi Stadium is looking to hire thousands from a two-day hiring fair being held this week.

The SoFi Hospitality Hiring Fair is coming at a time when many employers are having a hard time finding people to hire, so the stadium is sweetening the deal with a bonus after working four consecutive events.

People started lining up early morning on Tuesday for a chance to work at the new SoFi Stadium and it's not just regular games they'd be working.

"Our goal is to make sure that the football games, the concerts, the Super Bowl, are fully staffed up," said Adine Forman, executive director of the Hospitality Training Academy.

SoFi Stadium is looking to hire about 1,200 to 2,000 people for various jobs, including cooks, dishwashers, concession stand workers and more.

"I'm trying to improve on my cooking skills so this is going to be my first job as a cook," said Diana Guillen, after she was hired as a cook at SoFi Stadium. "So I think this is really going to help me. It's a good start for me, so I'm ready for it."

During the job fair attendees go through the job application process, interviews and some are hired right on the spot.

"It feels really awesome knowing that being an L.A. native and that I am a part of some thing which is really big and special," said Derrick Powell, who was hired.