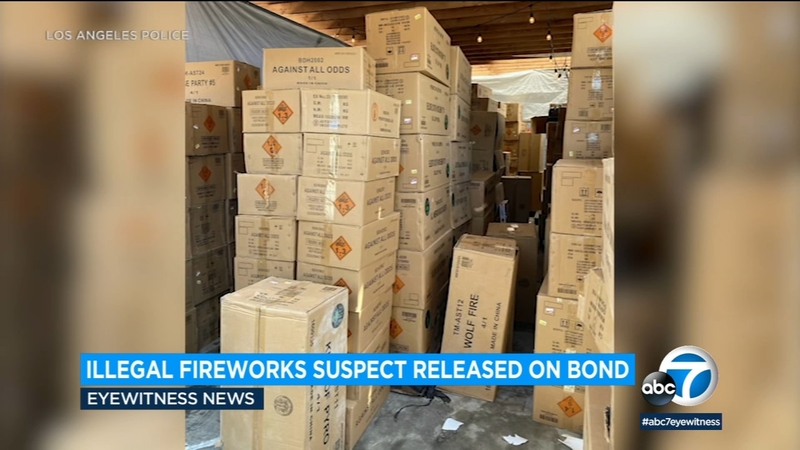 SOUTH LOS ANGELES (KABC) -- The man accused of stashing a cache of illegal fireworks and improvised explosives at a South Los Angeles home was released from jail on bond the day after an attempt by police to safely detonate the material resulted in a massive explosion that rocked the neighborhood and injured 17 people.

Arturo Ceja, 26, was released Thursday after his bond was set at $500,000. He had been arrested on suspicion of possessing a destructive device.

LAPD Chief Michel Moore said the fireworks were bought out of state in order to sell them in the neighborhood for use on the Fourth of July.

The neighborhood was rocked Wednesday evening by the blast that left 17 people injured, including several LAPD officers and an agent with the Bureau of Alcohol, Tobacco, Firearms and Explosives.

LAPD seized at least 5,000 pounds of illegal fireworks from the home and during the course of removing them to an off-site location, improvised explosive devices were found and transferred to a "total containment vehicle" with an iron chamber, which is designed to house explosive material that can be safely detonated. When the items were detonated at the scene, Moore said there was a "total catastrophic failure of that containment vehicle."

The blast flipped and damaged cars and smashed windows in homes and a laundromat. The explosion was heard blocks away. The debris field covers an area of at least two to three blocks around the explosion site.

An investigation into determining why the explosion happened continued Friday with ATF agents looking for evidence around the area of the blast at 27th and San Pedro streets..

The ATF gave no timeline as to how long the agency's investigation will last.