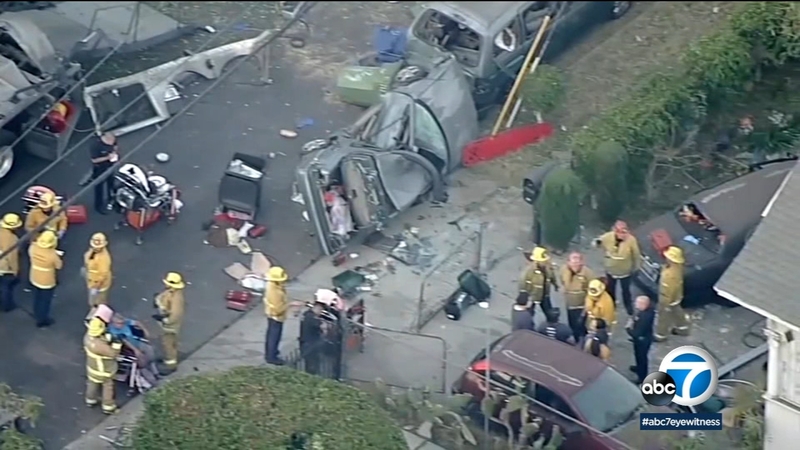 SOUTH LOS ANGELES (KABC) -- The massive explosion that injured 17 and damaged a South Los Angeles neighborhood occurred one week ago, but those impacted have a long road ahead.

"It was really hard. We came to get checked by the doctor," said Sofia Zaragoza, who lives a block from where the explosion happened.

Zaragoza and her family suffered ringing in their ears following the blast and stopped by the local assistance center set up by the city Wednesday to see a doctor. The American Red Cross, government agencies, utility companies and nonprofits are here to assist families and businesses impacted. Roughly 20 homes had to be evacuated.

"On Fourth of July, I was really scared because I just kept hearing fireworks. And when I hear somebody clapping, I get scared. Not that long ago something fell and I flinched. It's really traumatizing," said Matthew Hernandez, who lives next to the explosion site.

"I think one of the most important is the mental health component," said James Westbrook, the chief of staff to Councilmember Curren Price. "We've come across a quite a few residents that have been traumatized by the explosion, so it was very important for us."

"It's just sad that it happened and I feel for the people who have suffered worse damages than we have and for the injuries of those," said Marc Nesbit, whose church was damaged by the blast.

Nesbit is the senior warden with St. Phillip's Episcopal Church, which suffered substantial damage including to the basement ceiling which broke away from the building's foundation.

"Explosive in the residential district is ridiculous. Explosives anywhere outside of a battlefield or a military training is unnecessary. Within a civilization population. They should have been removed and taken to a safe location to be detonated," said Nesbit.

Many residents are asking that same question, wondering why the LAPD detonated the illegal fireworks inside their total containment vessel in the middle of the neighborhood. That vehicle was completely destroyed by the blast.

"I hope that we as a church can get some assistance in the repairs that we face having to repair the damage that was done. I also hope this brings awareness throughout the city about fireworks. The unnecessary use of the explosive fireworks throughout all of LA, causing fires, causing damage," said Nesbit.