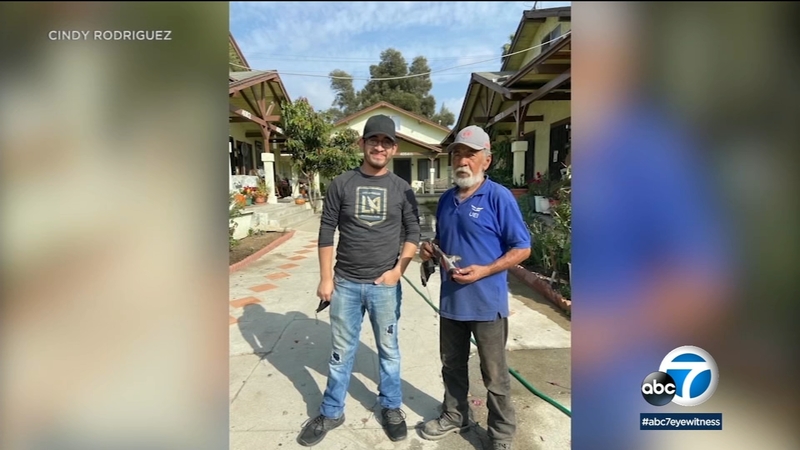 SOUTH LOS ANGELES (KABC) -- A 75-year-old man was killed when he was struck by a hit-and-run driver in South Angeles last month, according to police.

Los Angeles police said the crash happened April 27 in the area of Trinity Street and 41st Place around 9:15 p.m.

The victim was later identified as Hector Castro Hirales. He was crossing the street when he was hit by a silver, compact SUV. Police said the driver failed to stop and render any aid or remain at the scene.

Hirales was transported to a hospital, where he died.

Surveillance video released shows the vehicle making a left turn while the pedestrian was in the middle of the road crossing the street. The SUV collides with the pedestrian head-on, initially stops after making impact and then drives away.

The victim is seen laying on the ground motionless after the driver takes off.
A reward of $50,000 has been offered for information leading to the suspect.

The victim's family is asking for the public's help in finding the driver.

"Today we just saw the footage, and we can't believe that this person just struck him and left him lying there," the victim's daughter Cynthia Rodriguez said. "After he struck him, he went over him and paused and then just kept going."

"In that video you can see my grandfather looking at the person that's running him over. How would that person feel if it was someone that they knew?" granddaughter Vanessa Aranda said as she fought back tears.

Community members are offering their support to the family.

"He knew so many people that he helped out and everybody just tells us he was a nice person, a nice man, always helped people," Rodriguez said.

"Our family is broken and we'll never be the same," Aranda said.