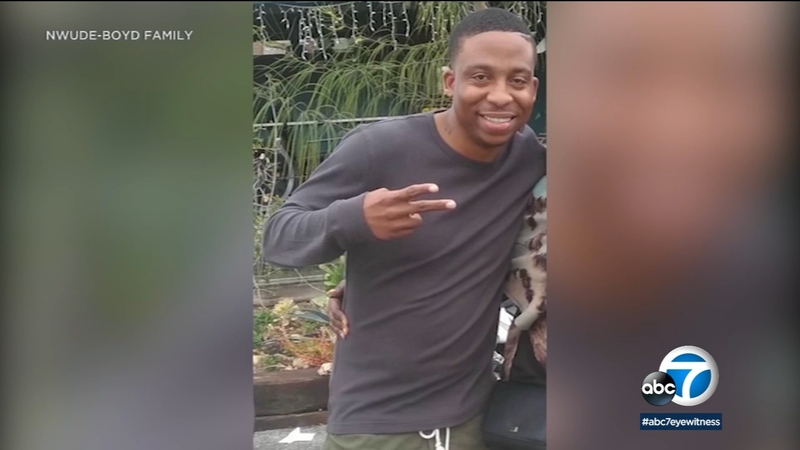 SOUTH LOS ANGELES (KABC) -- Friends and family are remembering a 29-year-old man who was killed in a violent crash at the end of a police chase in South Los Angeles.

Marquin Nwude was crossing the street at Florence and Central avenues last week when officials say he was mowed down by a stolen car suspect who was being pursued by police. He was dragged several hundred feet and died at the scene.

A vigil was held in his honor on Monday night. Family members said Nwude was working on overcoming some personal challenges when his life was cut short.

Last Thursday, Nwude was hit by a speeding car that allegedly ran a red light. LAPD officers had been pursuing the vehicle but authorities said that chase was terminated before the female driver of the stolen car struck and killed him.

Police said the driver, a woman in her 40s, was taken into custody. Authorities have not said what charges she is facing.

Family members said Nwude had just left a hospital where he was receiving mental health care. His mother said he suffered from bipolar depression.

Relatives said he was bright and talented.

"In my heart I wanted to believe that he was going to find his way and get better, until this happened. That's what saddens me the most. That he didn't get that chance," said his aunt, Michelaye Boyd.