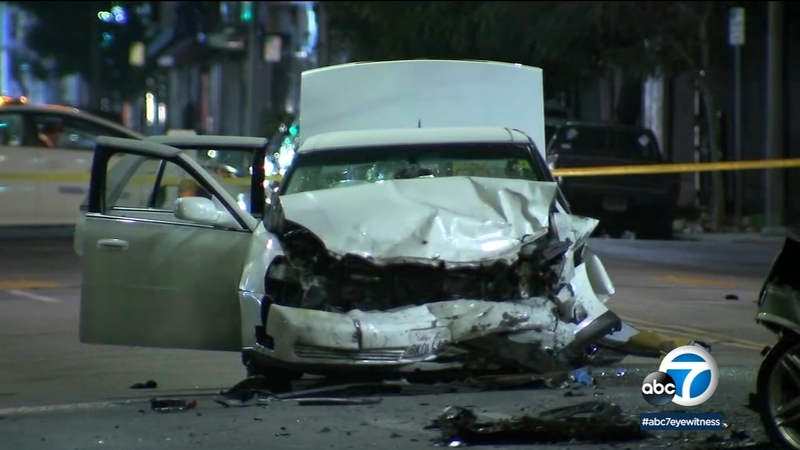 Community leaders and victims' families are hoping to make streets safer amid a sharp increase in the number of deadly traffic crashes, especially in South Los Angeles.

Over the weekend, a somber display of yellow flags was erected to represent the nearly 1,500 people injured in South L.A. in the last 12 months in traffic violence. Nearly 125 white roses represented the innocent lives lost.

"What was once a beautiful memory ended up being the last time my family would ever be together," said Bibiana Diaz, who lost her stepfather when a hit-and-run driver ran down her family while they were riding their bikes.

"When I heard the impact, I turned around to see him in the air, my little sister sliding across the pavement and my nephew stuck beneath another vehicle," she said.

Community activists say over the last year, traffic deaths have skyrocketed, especially in South L.A., which has seen a 46% increase. The vast majority of those crashes are hit-and-runs.

On Saturday, victims' families and community leaders gathered to honor those lost and call on drivers not to drive distracted.

"It's both speed and inattention to basic traffic laws. So I think from the perspective of...the victim, it's completely avoidable," said Cpt. Aaron Ponce with the Los Angeles Police Department's South L.A. Traffic Division.

From an LAPD officer run down while directing traffic, to a 19-year-old college student killed in a violent crash, community members say so many of the lives lost were preventable.

The L.A. Department of Transportation says it's working on ways to reduce the growing number of traffic-related crashes and deaths.

The department's Connie Llanos says that could include Improving signalized intersections and crosswalk or slowing down speed limits where possible by redesigning streets.

According to the non-profit Streets Are For Everyone (SAFE), L.A. is the hit-and-run capital of the U.S. with 48-52% of all collisions being a hit-and-run.