Why is it so windy lately? One expert points to lack of El Niño weather pattern

In February, at least a portion of SoCal was under a wind warning or wind advisory for all but three days, officials say.
KABC
By Rob McMillan 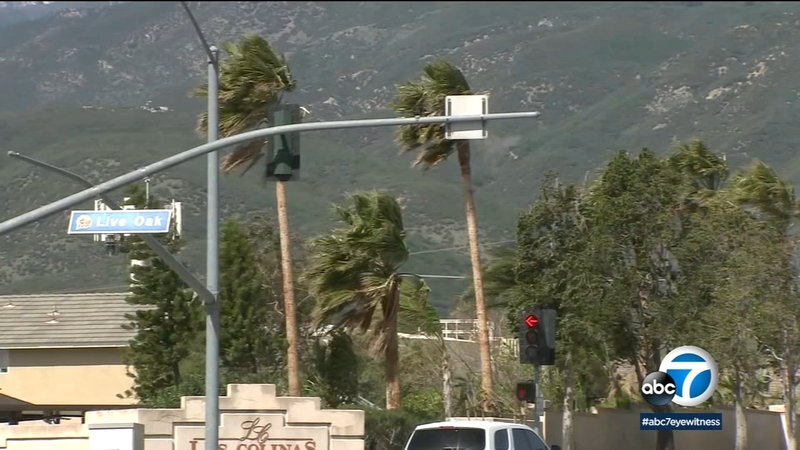 Why is it so windy lately? Experts point to this as possible reason

If you feel like we've been experiencing an unusually high number of Santa Ana wind events for this time of year, officials with the National Weather Service say you're right.

Historically, Santa Ana wind events start to occur in the month of September, happen most frequently in December, and tend to wane as we approach spring.

But for the month of February, an NWS official said at least a portion of Southern California was under a wind warning or wind advisory for all but three days of the month.

Why is this happening?

One expert believes the answer might lie in the fact that we're not in an El Niño weather pattern right now.

Marilyn Raphael, a professor of geography at UCLA, has crunched the numbers over approximately 60 years. She said the data suggests that late in winter, Southern Californians tend to experience more instances of Santa Ana wind events in non-El Niño years.

"We have fewer events, and they don't last as long," said Raphael about the number of wind events in El Niño years.

Raphael said one of the ingredients for a Santa Ana wind event is for a high pressure system to form over the Great Basin, a portion of the United States that covers most of Nevada and Utah. She said that doesn't happen as often during El Niño weather patterns.

"What we found is that the occurrence of the Great Basin high [pressure system] during El Niño events was less frequent," said Raphael, who points out that the phenomenon doesn't appear to have as significant an impact early in the Santa Ana wind season. "That effect was shifted to late in the season rather than early in the season. So you would see it more strongly in March rather than October."

Raphael also said that over the past several decades, we've experienced Santa Ana events that tend to be longer in duration. For example, a wind event that lasts several days as opposed to just one or two days.

Another question is whether these occurrences are being affected by climate change.

"With continuing climate change, we would expect a narrowing of the Santa Ana wind season," said Gershunov. "So basically [we will] see a slight decrease in Santa Ana activity in the fall and spring, and not much change in terms of the winds themselves in the wintertime. But of course, they will bring warmer conditions."

But Gershunov said while that's what he eventually expects to happen, there's little evidence that it's happening already.