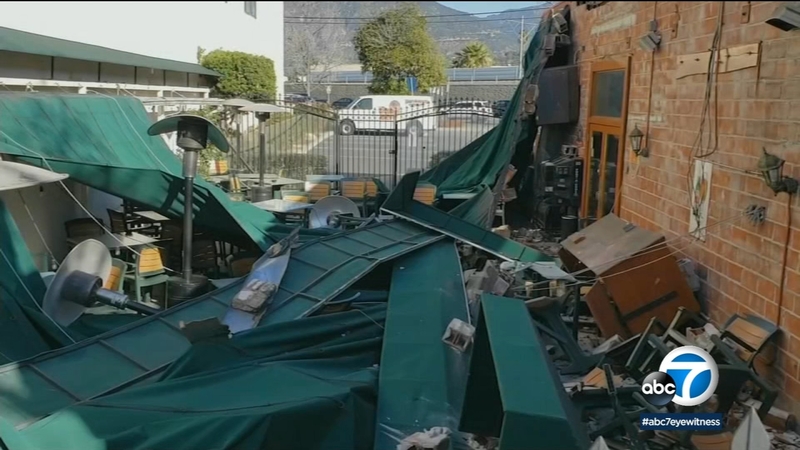 The freeze warnings were in effect for parts of the Antelope Valley, Ventura County and the Inland Empire until Wednesday morning.

Residents throughout the region had to deal with trees being pulled up from their roots and palm fronds littering the sidewalks.

In Arcadia, the Santa Ana winds flattened the outdoor patio at Matt Denny's Ale House. Luckily it happened overnight as the restaurant was closed and no injuries were reported.

"It's like a boat rocking," she said. "It's very loud. And we have a very old house. So that makes it worse, because everything just shudders and shakes."

Officials warned residents to stay away from downed power lines and assume they remain energized and dangerous while on the ground.

Riders and workers at the Metrolink station in Lancaster Tuesday morning were bundled up while waiting for trains, except for a few, including a mother-daughter pair who weren't wearing any winter clothing.

Her daughter did not share her immunity to the frigid conditions.

"I'm gonna try to go home and get the right clothes on and then stay inside the majority of the time with the heat," she said.

Temperatures in the Antelope Valley dipped to about 14 degrees overnight.

"Shivering cold, but I try to walk around to stay warm. Usually around this time of the night, the graveyard shift, it usually gets the worst it can be basically," one Metrolink security guard said.

Gusty conditions will make travel difficult at times for high-profile vehicles on highways in the Cajon Pass, according to the NWS. Winds out of the north are expected to be between 15 to 25 mph, with gusts potentially reaching 60 mph.
EMBED More News Videos

Gusty conditions Tuesday will make travel difficult at times for high-profile vehicles on highways through mountain passes, where gusts may reach up to 60 mph in some areas.

In Fontana on Monday, a semi-truck toppled onto its side amid strong winds between the 210 and 15 freeways interchange. Trees in the area were also bending in the wind, and debris were stuck in branches and plants.

Eyewitness News forecasts call for highs in the low 60s in Los Angeles and Orange counties, as well as the beaches, valleys and Inland Empire. Mountain regions will see a high of only 31 degrees, and deserts can expect highs around 50.