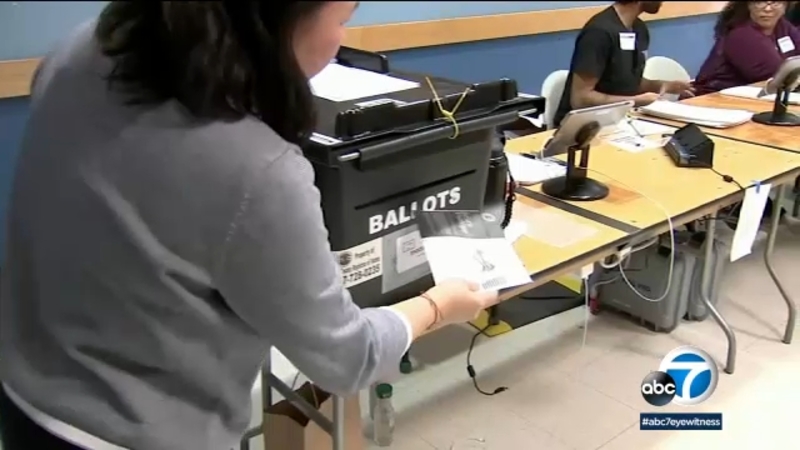 And images from Wisconsin's primary in April concerned election officials.

In-person voting kicked off Saturday, May 2 for the special election in California's 25th District to fill Katie Hill's seat. The district includes parts of northern LA County including Santa Clarita, Palmdale and Lancaster, as well as parts of Ventura County near Simi Valley.

Los Angeles County Registrar Dean Logan said great care will be taken to sanitize voting equipment after each use.

Democrat Christy Smith is up against Republican Mike Garcia. Every registered voter has received a ballot in the mail. LA County officials say that so far based on returns mailed in, turnout is healthy.

"I'm more concerned about any effect that a reduction in voting locations could have in November," Logan said. "We don't want to have a repeat of some of what we experienced in March."

Logan says voters shouldn't be worried about voter fraud when voting by mail.

"Signature verification provides that layer of assurance that if somebody was trying to intercept a ballot or trying to mess with someone else's ballot, we're going to catch that on the incoming side because the signature isn't going to match and we're going to contact the voter. That's actually a higher level of verification than what takes place for in-person voting," said Logan.

Christy Smith's campaign praised the decision to mail ballots to everyone in the interest of public health.

The consensus is that mailing in your ballot from home is the safest way to vote right now, but if you're not registered or have language or accessibility issues, you also have six locations to vote at in-person on May 12. For the latest information on the 25th Congressional District special election, you can visit the county election site here.
Report a correction or typo
Related topics:
politicslos angeles countysanta claritavotingcongressional raceelectioncampaign
Copyright © 2022 KABC Television, LLC. All rights reserved.
TOP STORIES
LIVE: 14 students, 1 teacher dead in TX school shooting, gov says
Authorities respond to East LA shooting possibly involving CHP
1st possible CA case of monkeypox believed to be in Sacramento
$374M settlement reached in lawsuits against ex-UCLA gynecologist
Man in wheelchair who was shot near South LA McDonald's has died
Father of Texas yoga instructor accused in cyclist's murder speaks out
US birth rates rises for first time in 7 years
Show More
3-alarm fire erupts at commercial building in Los Alamitos
LA City Council to consider ordering analysis related to teen killing
Senior with Native American regalia on cap denied grad walk
Fort Liberty proposed as new name for Fort Bragg
California aims to shield against Texas-style abortion laws
More TOP STORIES News