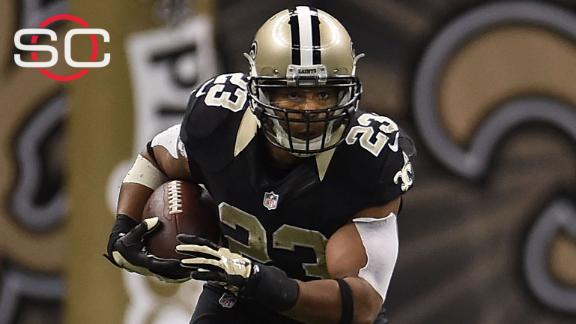 The San Francisco 49ers, looking for an option at running back after injuries to Carlos Hyde and Reggie Bush, signed free agent Pierre Thomas.

Thomas, who spent eight seasons with New Orleans and is the fourth-leading rusher inSaintshistory with 3,745yards, also posted a picture of himself holding up a 49ers jersey on Instagram. The Niners announced the deal later Tuesday.

His 327 career receptions are the most by a running back in Saints history. He ranks in the top seven in total yards from scrimmage (6,353) and total touchdowns (41).The undrafted free agent out of Illinois in 2007 also was equally valuable as a receiver out of the backfield and as a pass protector.

Bush is having season-ending surgery on his torn MCL on Tuesday, sources told ESPN NFL Insider Adam Schefter. He was carted off the field with a left knee injury Sunday after he slipped on concrete near the stands in St. Louis on a punt return.

Hyde, the team's regular starter who has 470 yards this season, was ruled out of Sunday's game as he continues to deal with a stress fracture in his left foot.