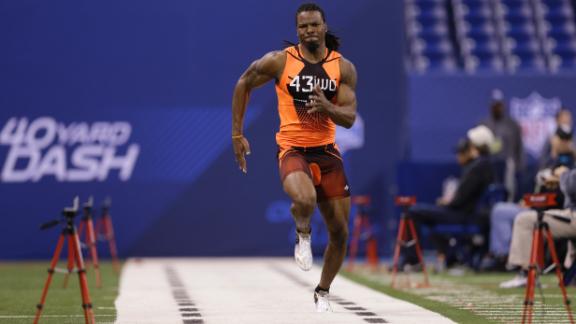 Three players who had the fast 40-yard dash times at the NFL combine in Indianapolis are $100,000 richer.

Michigan State cornerback Trae Waynes, Miami wide receiver Phillip Dorsett and West Virginia wide receiver Kevin White each came away with the prize given by Adidas after posting 4.31, 4.33 and 4.35 times, respectively, in the 40.

The three players not only wore Adidas cleats, but signed an endorsement deal with the company before running, which was a condition of the offer.

UAB wide receiverJJ Nelsonran the fastest time in the combine (4.28) and did it in Adidas cleats, but company spokesmanMichael Ehrlich said Nelson didn't sign with the brand before running.

Last year, Adidas also gave out $100,000 to the player who ran the fastest 40-yard dash in its cleats, but after former Oregon State wide receiverBrandin Cookstook the money and then signed with Nike, the German shoe company modified theoffer.

Adidas originally promised Porsche 911 Carrera cars to the fastest draft prospects, but had to change the deal when the NFL called attention to the fact that it conflicted with the league's General Motors sponsorship.