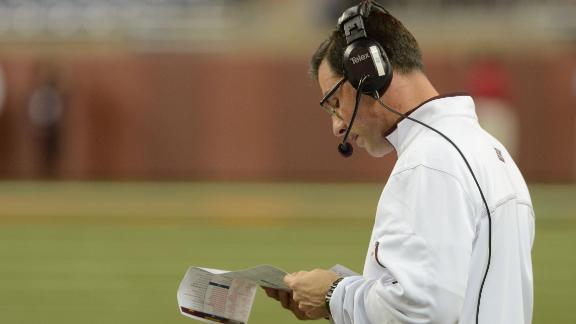 Arkansas coach Bret Bielema has dipped into the head-coaching ranks to find his offensive coordinator.

"Dan is a great fit for our program," Bielema said. "He runs a pro-style offense and brings expertise at the quarterback position as both a player and coach. We played against each other in college, and he was a very intelligent and talented quarterback who showed great toughness and leadership. He has an outstanding reputation and will be a tremendous asset for Razorback football."

Enos, a former starting quarterback at Michigan State, coached under Mark Dantonio for six seasons at Michigan State and Cincinnati. He led Central Michigan to two bowl appearances in his five seasons as coach and compiled a 26-36 record, including a 20-18 mark over the last three seasons.He's also spent time during his coaching career at North Dakota State, Western Michigan, Missouri State, Southern Illinois and Lakeland College.

"I want to thank [Bielema] for this wonderful opportunity to be part of something special at the University of Arkansas," Enos said. "The challenge of winning a championship in the SEC and developing young men at the highest level of college football is very attractive. Bret and I share many of the same philosophies, and I'm excited to open the next chapter of my coaching career down in Fayetteville."

The Hogs were 7-6 last season, Bielema's second at the school, and won four of their last six games, including a 31-7 rout of Texas in the Advocare V100 Texas Bowl.

"This is an extraordinary opportunity for a leader who seeks a team that's strong on the field and in the classroom," Heeke said.