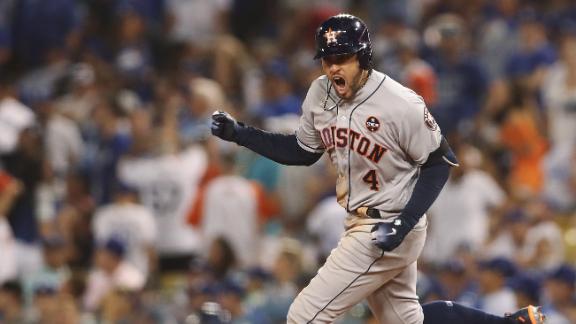 Game 2 of the World Series on Wednesday night was all about the home run.

A record number of them.

The Houston Astros and Los Angeles Dodgers combined for eight long balls at Dodger Stadium, the most ever in a World Series game. George Springer had the biggest, a two-run drive in the 11th inning that helped the American League champions to a 7-6 victory and a split of the opening two games in Los Angeles.

"This was a night, obviously, the ball was carrying," Astros manager A.J. Hinch said. "A lot of big-time players stepping up and getting big swings."

Springer's teammate, Marwin Gonzalez, added a solo shot in the ninth inning to tie the game at 3, and fellow Astros Jose Altuve and Carlos Correa went back-to-back in the 10th, as Houston became the first team in major league history to homer in the ninth, 10th and 11th innings of a postseason game.

But the Dodgers didn't go down quietly.

Yasiel Puig had a solo shot in the 10th inning, and after Springer's blast, Charlie Culberson added a solo shot of his own in the bottom of the 11th, before Astros right-hander Chris Devenski struck out Puig to end the game.

The five combined extra-inning home runs were the most ever in a postseason game. The previous record was three, set by the Cleveland Indians and Boston Red Sox in Game 1 of the 1995 AL Division Series.

Before the late-game long balls, Joc Pederson and Corey Seager of the Dodgers set the tone with home runs in the early innings.Pederson's and Seager's homers were the only hits that Astros starterJustin Verlandergave up while throwing on the 93-degree night.

"I think the heat affected the home runs," Verlander said. "I think Dodger Stadium is pretty famous for, at night, the ball not carrying. Doesn't seem like the case the last couple of nights."

The eight total homers bested the previous World Series record of seven set in 1989 by the Oakland Athletics and San Francisco Giants. It also tied the record for a postseason game.

Overall, there have been 11 home runs in this World Series so far, tied with 2002 (Angels-Giants) for the most in the first two games of a World Series, according to Elias Sports Bureau.

Game 3 is Friday night in Houston.