Baseball's black holes: The worst team at every position 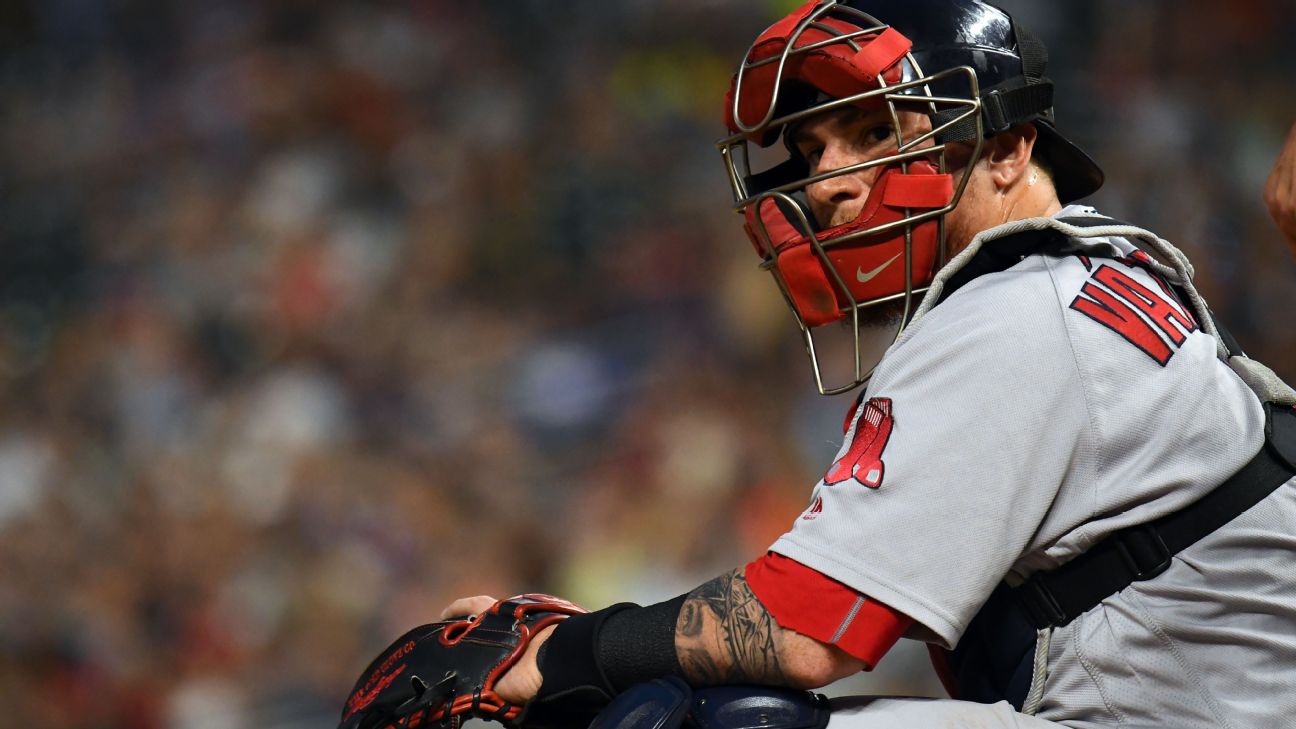 Look, sometimes you just blow it. You go into the season with a well-thought-out plan at some position, you put your faith in the talented players whom you've acquired to fill that position, and either the plan or the faith goes wayward.

Maybe an Opening Day starting player hits .207, and for good measure breaks a finger in July; maybe his replacement hits .177; maybe there were few options available at the trade deadline, and maybe you didn't have a single marginal prospect at the position in your entire farm system. Maybe they all combine to produce negative two wins above replacement at the position, the worst of any team in baseball. Maybe you should be ashamed of yourself, but the best you can do is stay positive and hope next year goes a little bit better.

So that's theBoston Red Sox. Every position had a team that was the worst at it, and last year at one position it was the Red Sox, one of the most successful teams in the history of the game.

Davis' 2018 season probably will be remembered by ball fans for at least a couple of decades, because it is (along with Adam Dunn's 2011 and the controversial Jeff Mathis-in-Anaheim years) the modern standard for everyday terribleness. His WAR was the lowest since Kurt Manwaring's in 1997, and the worst by a full-timer (500 PA) since Mike Champion's in 1977. He was the club's highest-paid player, in the third year of an eight-year pact, so the Orioles tried to let him play through it. It didn't get better: He hit .132/.179/.151 in September.

At this point in their rebuild -- which began, spurred by Davis' terribleness, last summer -- the Orioles are basically trying to get worse before they get better, so they haven't added anybody to unseat Davis. There hasn't been a single rumor linking them to a major league first baseman this winter.

The O's second-best hitting prospect is a third baseman with a below-average arm, so Ryan Mountcastle might eventually save the position, but that isn't Plan A for Mountcastle, and it won't happen this year. So: Davis! Just during last season, Davis' career OPS dropped from 322nd all time -- between Joe Morgan and Paul Molitor -- to 532nd, between Hank Blalock and Seth Smith. PECOTA, Baseball Prospectus' projection system, forecasts another sub-replacement season for him in 2019, which could push him down to Michael Tucker, Eddie Taubensee territory if he somehow gets another 500 plate appearances. Davis is signed for five more years, and the Orioles' rebuild is gonna take a while, and if for some reason you placed a bet that Chris Davis would finish his career as one of the top 1,000 hitters of all time -- hang on.

The Tigers traded Ian Kinsler to the Angels over the winter, and Machado -- who had one career homer in 105 career games -- became the Opening Day starter. He hit his second career homer on April 18 but batted .195/.263/.245 in the two months to come before a demotion to Triple-A. His primary replacement was super-utility guy Niko Goodrum, who (strangely) hit really well while playing offense-oriented positions, and really poorly while playing defense-oriented positions:

Nothing, really. Machado was let go. The only rumor that has linked the Tigers to a second baseman this winter was this one: "While DJ LeMahieu played his high school ball in Michigan, a return to his old stomping grounds in the form of a Tigers contract isn't likely."

Goodrum still appears on the Tigers' depth chart backing up first base, shortstop, third base and right field, but he is rightfully listed atop the options at second base, where he projects to be above replacement level. Dawel Lugo, part of the return from Arizona in the J.D. Martinez trade, was to be the eventual answer at the keystone, but he's more questionable after his hyperaggressive hitting approach collapsed in Triple-A last year.

Cozart signed to play second base after a career year in Cincinnati, moved to third base after the Angels acquired Kinsler, and hit .219 before season-ending surgery on his shoulder. Eight part-timers filled in at third, but with similarly bleak production at first and second bases, the Angels were forced to triage.

No moves have been made.

The Angels have reportedly pursued Josh Harrison, who could play third base (with Cozart sliding to second) or second (with Cozart remaining at third). There remain a bunch of veterans on the market who could handle second or third, including Jed Lowrie, Marwin Gonzalez, Asdrubal Cabrera and Mike Moustakas. There were reports last winter that this same Angels front office made a multiyear offer to Moustakas.

Arcia was one of the top 10 prospects in the game before his rookie season in 2016, and one of the five best shortstops in the National League in 2017, but he was an unforeseeably flimsy .236/.268/.307 hitter in 2018. Arcia's defense remained good, but after acquiring Moustakas in July, the Brewers often opted to punt infield defense entirely to squeeze a fourth hitter into the infield, and Arcia lost some playing time.

The Milwaukee infield got emptier overall (Moustakas is a free agent and Jonathan Schoopsigned with the Twins), and Arcia's presumed playing time has only gone up. The Brewers' attention has been focused more at second base.

Reyes was a Rule 5 pick, so he had to stay on the big league roster all season long if the Tigers didn't want to offer him back to his old club. Part of that deal was watching the raw 23-year-old draw only five walks in 219 plate appearances; he was, by wRC+, the worst-hitting non-catcher in baseball, minimum 200 plate appearances. But the rest of the Tigers' left fielders weren't much better: Mikie Mahtook and JaCoby Jones and the rest combined to hit .206/.271/.348, worse than 25 teams' catchers.

Nothing. The Tigers' only real acquisition this winter has been shortstop Jordy Mercer, and they have lots of other problems: Their DHs were also the worst in the majors, for instance, and their catchers were fourth worst.

The Tigers probably will end up giving the spot to Christin Stewart, a rookie who has averaged 28 homers a year over the past three minor league seasons. PECOTA projections like that option: at 1.6 WAR, he would make the Tigers about average at the position.

Of all the young players the Marlins got in their post-2017 fire sale, Brinson seemed to be the best. He'd been one of the game's top 30 prospects three years in a row, had conquered the high minors and was ready to step in as the Opening Day center fielder and leadoff hitter. But for a top prospect he had always been a fairly divisive one, with a long swing and uneven medical history. He went 0-for-5 on Opening Day, had a 1-for-36 stretch in mid-April, missed a month with hip inflammation and finished the season standing in the on-deck circle one hit shy of a .200 batting average. He had Giancarlo Stanton's high strikeout rate (13th in the majors) but Daniel Descalso's middling exit velocity (108th) and Jose Peraza's minuscule walk rate (202nd, out of 214 hitters).

In what's something of a theme of this piece so far: nothing. The Marlins haven't acquired anybody who will challenge Brinson for playing time. Baseball operations president Michael Hill said in December that "we like the candidates we currently have in-house," naming Brinson first among a list of outfielders who were also around last year.

Brinson will get another long attempt to establish himself in the majors. He has the physical tools and the high-minors track record. But, as Dan Szymborski recently wrote at FanGraphs, his projections have plummeted over the past three seasons, from "above-average major league center fielder" to "fifth outfielder."

Each team listed here has found its own particular obstacle, but broadly speaking there are two categories: the team that didn't bother to pursue somebody good, and got what it paid for; and the team that really wanted a player, spent significantly to get that player, and then watched that player turn into not just a diminished version of himself but the very worst version of a major leaguer. The Orioles gave Davis a franchise-record contract. The Marlins traded the 2018 MVP to get Brinson. The Brewers refused to even entertain trade offers for Arcia last winter.

And coming off a playoff appearance in 2017, the Diamondbacks made Souza their big offseason acquisition. He was, in effect, going to replaceJ.D. Martinez. Of course, he couldn't replace what Martinez had done in Arizona, but he was still in his 20s, coming off a four-win season, he had speed and power and plate discipline, and he would cap the scary part of the Diamondbacks' batting order. And then, for no real reason, he had one RBI in April and hit not 30 homers (as he had in 2017), but five.

We know baseball is unpredictable. We know it's basically silly what we do after each transaction, arguing about whether a player is going to produce 2 WAR or 3, whether he is overpaid at $16 million instead of $14 million. We know these sorts of margins are beyond our predictions. You can't predict baseball.

But it's not the margins we miss by. We missed Chris Davis by entire leagues -- when the Orioles signed him, he was supposed to be an MVP candidate at this point of the contract, and instead he was worse last year than the median guy in Double-A. Brinson was a top-30 prospect three years in a row, was supposed to be a ROY favorite last year -- and instead the Marlins' ROY contender turned out to be Brian Anderson, an unheralded 25-year-old whose name I learned on Opening Day. You try so hard as a GM, spend so much, invest so much faith and planning, and the result isn't a little disappointment; sometimes it's being the worst in baseball.

Nothing. Souza was never supposed to be on this list. What choice is there but wait and trust that reason will reassert itself?

As far as the aforementioned Red Sox, catching was their glaring weakness. At minus-1.8 WAR -- the second-lowest WAR by any team at any position -- they were almost a full win worse than the No. 29 team, the Orioles, who finished 61 games behind Boston in the standings. All-Star catcher Wilson Ramos was a free agent and All-Star catcher J.T. Realmuto is available on the trade market, but the rumor mill this winter has had the Red Sox more likely to trade away a catcher than to acquire one.

Probably Christian Vazquez will hit quite a bit better this year, as he did in 2017. ArguablySandy Leon adds value that WAR doesn't pick up, with the way he manages a pitching staff. PossiblyBlake Swihartwill finally find his footing in the majors. Presumably the Red Sox see more downside than upside in tinkering with a 108-win roster. Ultimately, though, there's just a lot of youneverknow left over.