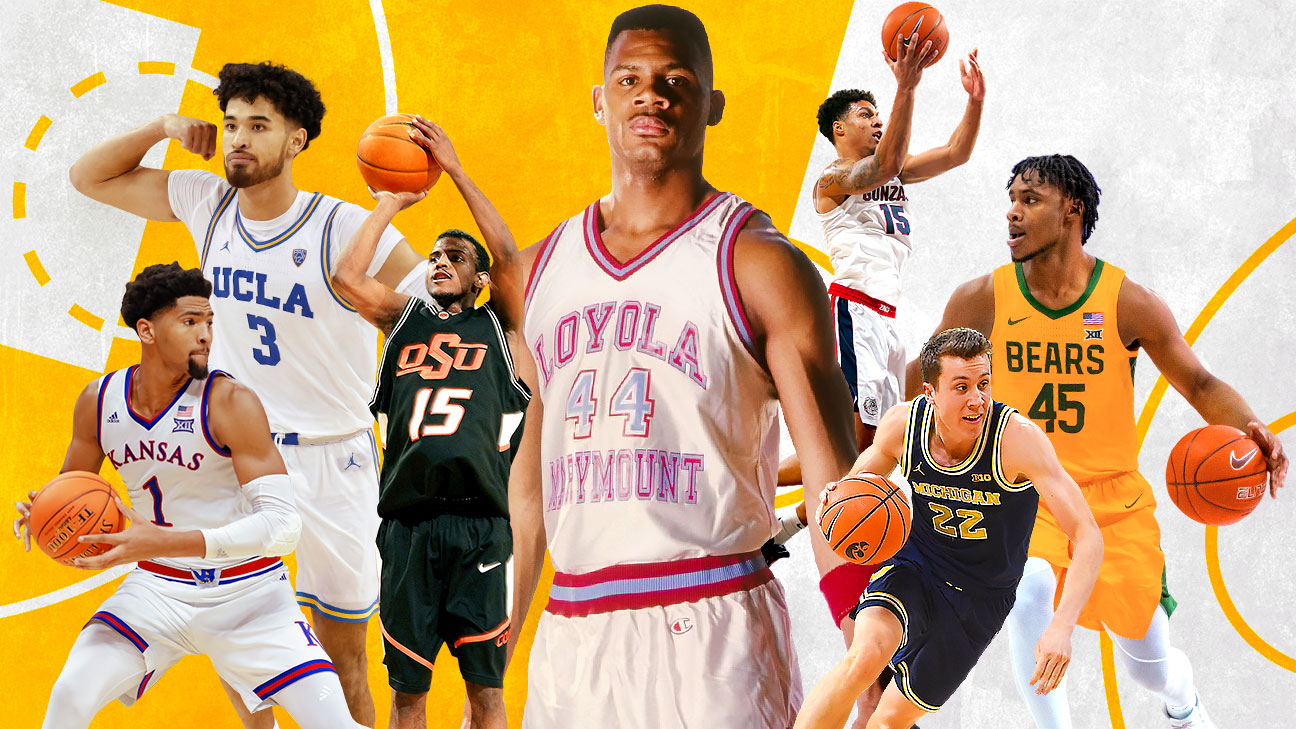 Everyone says we're living in the era of the transfer -- and everyone's right.


Last April also was the moment when the NCAA instituted its one-time transfer rule, allowing athletes to switch schools once in their careers with immediate eligibility. The rule has encouraged players who otherwise might stay put to take the leap and enter the transfer portal.

The dawn of this new era seems like a good time to take stock of the best transfer success stories in college basketball history.

A fair portion of these successes date from the recent past because players simply transfer more often than they used to. Perhaps encouraged by the NCAA's adoption of the graduate transfer rule a decade ago, players have become increasingly open to switching schools.

In order to rank the best transfers of all time, we first have to define the term "transfer." Consider the example of Jared Butler, still another star from Baylor's 2021 title team. Butler enrolled at Alabama before a scholarship opened up for him in Waco, Texas. He never played for the Crimson Tide, however, and thus Butler resides in the same pseudo-transfer category as another rather celebrated player named Larry Bird.

The legend from French Lick, Indiana, originally committed to play for Indiana. Bird was actually on campus in Bloomington for a few weeks before he changed his tune and enrolled a year later at Indiana State. But, like Butler, Bird never took the floor for his first school.

Before, during and for a time after Bird's moment, there were also a number of junior college transfers who made big splashes in Division I, up to and including Wooden Award winners like Walter Berry of St. John's and Larry Johnson of UNLV. For that matter, a legend and juco transfer like Elgin Baylor panned out pretty well for Seattle University before there even was a Wooden Award.

We recognize the greatness of all of the above players, but for the purposes of this list, a "transfer" is someone who logged minutes playing for a different four-year program.

Here are the 20 greatest transfers of all time:

In 1988-89, Gathers became the second player in NCAA men's basketball history to lead Division I in both scoring and rebounding. His counting stats were helped along by Loyola Marymount's legendarily fast pace, of course, but there was no mistaking the impact of a 6-foot-7 player who ran the floor, crashed the glass and made 61% of his 2s. Gathers' tragic death due to a heart condition during a 1990 WCC tournament semifinal sent shock waves through the sport. His teammates held a players-only meeting, voted to continue with their season and reached the Elite Eight as a No. 11 seed before falling to eventual champion UNLV.

The first of two players on this list who transferred out of scandal-plagued Baylor in 2003, Lucas led Oklahoma State to consecutive No. 2 seeds in 2004 and 2005. Though curiously snubbed for All-American honors, the 5-11 point guard was named AP Big 12 POY in 2004 and was a two-time first-team all-conference selection. His 3 with 6.9 seconds remaining in the regional final against top-seeded Saint Joseph's lifted the Cowboys into the 2004 Final Four. After shooting 41% on his 3s and 90% at the line at OSU, Lucas played in the NBA and internationally for 11 seasons.

Mitchell is currently embellishing his reputation as a defensive master in his rookie season with the Sacramento Kings. His nickname, after all, is "Off Night," as in what the player he's guarding is about to experience. Mitchell averaged 17 minutes coming off the bench as a freshman at Auburn before landing at Baylor and becoming arguably the most dynamic two-way player in the nation. As a junior, the 6-2 combo guard drained 45% of his 3s while continuing to make life miserable for opposing backcourt stars. By that point the Bears had won a national title and the NBA had seen enough: The Kings drafted Mitchell with the No. 9 pick.

When this list is updated in a season or two, it will likely include even more players who, like Juzang, were granted immediate eligibility at their new programs. As an 18-year-old at Kentucky he was viewed as a defensive liability by the coaching staff, and his shooting wasn't accurate enough initially to earn much playing time. The rest is history. Southern California native Juzang transferred back "home," and more than any other player powered UCLA's dramatic run from the First Four to the 2021 Final Four. In the Bruins' NCAA tournament win against Michigan and overtime loss to Gonzaga, Juzang scored 57 total points on 23-of-37 shooting.

Eight years ago, Robinson was playing in Division III for the Williams College Ephs in Williamstown, Massachusetts. Now he's a starter for the Miami Heat. This remarkable and quite possibly unsurpassed case study in upward mobility was aided and abetted by John Beilein. It was the then-Michigan coach who put his trust in the tape he watched and in the word of Robinson's coach, Mike Maker, a former assistant of Beilein's at West Virginia. Robinson made 42% of his 3s over the course of three seasons in Ann Arbor. One day he'll tell his grandchildren about how he played in both the D-III (2014) and D-I (2018) national championship games.

Though he played just one season with his "new" team, Clarke made the most of his time in Spokane. On a Gonzaga roster that was projected to feature Rui Hachimura, the 6-8 junior transfer emerged as both a potent scorer and fearsome rim defender. Clarke converted 70% of his 2-point attempts for the season and scored 36 points on 15-of-18 shooting to go with five blocks against Baylor in the 2019 round of 32. Performances like that drew enough interest at the next level for Clarke to be selected with the 21st pick in that year's draft.

Maybe if Syracuse wasn't bracketed with emerging force of March nature and Butlercoach Brad Stevens in the 2010 field of 68, Johnson would have had the chance to perform heroic feats that April. Instead, the Orange fell to the Bulldogs 63-59 in the Sweet 16. Johnson earned first-team All-American honors after stepping in as the leading scorer for a group that won 28 of its first 30 games and earned Jim Boeheim his first No. 1 seed in 30 years.

When Dickau announced his intention to transfer from Washington to Gonzaga, the coach in Spokane was Dan Monson and the Bulldogs had just mounted what seemed like a miracle run to the 1999 Elite Eight. By the time the 6-0 point guard stepped on the floor for the Zags, however, he was playing for Mark Few and the program had now reached two consecutive Sweet 16s. In 2002, Dickau became the first Gonzaga player to be named a first-team All-American. He would not be the last.

Curry was lightly recruited out of Charlotte Christian School and he chose to commit to Liberty. Then, in March of his senior year in high school, a certain older sibling of his led Davidson to the 40th minute of the Elite Eight against eventual champion Kansas. The name Curry thereafter had a certain ring to it and, sure enough, Seth set school and Big South scoring records for a freshman as a member of the Flames. He then transferred to Duke, where in 2013 he drained more 3s than any other Blue Devil for a No. 2 seed that reached the Elite Eight.

The MOP of the 2013 Final Four, Hancock totaled 42 points off the bench in Louisville's close wins over Wichita State and Michigan. In the national title game, the 6-6 junior engaged in a scoring duel with UM All-American Trey Burke and walked off the floor that night with 22 points on 5-of-5 shooting from beyond the arc. It was a remarkable showing from a player who began his career as a freshman reserve for Jim Larranaga at George Mason.

Kimble and Hank Gathers were high school teammates at Dobbins Tech in Philadelphia. He followed Gathers to USC and then, in effect, Gathers followed Kimble to Loyola Marymount. After the death of his friend, Kimble led the Lions on their storied run in the 1990 NCAA tournament, shooting his first free throw in each game left-handed as a tribute. Kimble was a second-team All-American who averaged 35 points in LMU's warp-speed offense.

After playing alongside John Lucas III for two seasons at Baylor, Roberts transferred to Mississippi State. Upon his arrival in Starkville, both Roberts and his team were instant successes. The 6-9 junior won the 2004 SEC POY award and was named a first-team All-American. The Bulldogs posted a 14-2 record in conference play, earned the regular-season SEC title and were awarded a No. 2 seed in the NCAA tournament. It was and still is the highest seeding MSU has ever received.


Memphis native Lawson was a featured scorer from day one in his college career, first for two years at his hometown school and then for one season at Kansas. He earned first-team All-Big 12 honors in 2019 as the mainstay in a KU frontcourt that initially included a soon-to-be-injured Udoka Azubuike and then called upon Mitch Lightfoot and a young David McCormack. In two NCAA tournament games, Lawson scored 50 points, went 11-of-11 at the line and hauled in 21 boards before the No. 4-seeded Jayhawks fell to Auburn in the round of 32.

Macy's career was marked by success before, during and after his decision to transfer. The 1975 Indiana Mr. Basketball, he started 27 games and averaged 14 points for Purdue as a freshman. Nevertheless, he elected to transfer to Kentucky, where in his first season as a Wildcat he started every game for a team that won the 1978 national title. In an era before the 3-point line, Macy shot better than 50% from the field and averaged 15 points over his final two seasons. The 6-3 combo guard was named a first-team All-American as a senior in 1980.

As a national top-20 prospect, Williams-Goss was a significant recruiting win for Washington in 2013. He took over point guard duties right from the start in Seattle, but by the end of his sophomore season the Huskies were just 5-13 in the Pac-12. Williams-Goss then surprised many who thought he might jump directly to the NBA by instead transferring to Gonzaga. As a 6-3 junior in Spokane, he earned second-team All-American honors and led the Bulldogs to the 2017 national title game.

Kane was named first-team All-Big 12 in 2014 alongside the estimable likes of Marcus Smart and Andrew Wiggins. He led Iowa State to a Big 12 tournament title and all the way to the Sweet 16 before the Cyclones fell by five to eventual national champion UConn. A 6-4 scoring point guard, Kane blended in seamlessly with an ISU rotation that featured returning mainstays like Melvin Ejim and Georges Niang.

Wiltjer came close to winning national titles with two different teams. He averaged 12 minutes and five points a game as a freshman for the Kentucky team that won it all in 2012. Then he made it to the 2015 Elite Eight with No. 2-seeded Gonzaga before the Bulldogs fell to eventual champion Duke. As a 6-10 scorer who played the 4 in Gonzaga's offense, he often overmatched opponents with his accuracy from both sides of the arc.

After starting his college career in the same North Carolina recruiting class as Eric Montross, the 6-11 Rozier transferred to Louisville and averaged double-doubles in his sophomore and junior seasons. He won back-to-back Metro Conference POY awards, and in 1994 the Cardinals earned a No. 3 seed and reached the Sweet 16. That was the year Rozier was named a first-team All-American alongside the likes of Glenn Robinson, Grant Hill and Jason Kidd. Sadly, he suffered a heart attack and died in 2018 at the age of 45.

Pittsburgh native McConnell played two seasons at Duquesne, attended the 2012 round of 32 as a spectator at the Consol Energy Center and turned to his father and said he was ready to play at a higher level. The Arizona teams of the mid-2010s were consistently outstanding, and for two seasons the 6-1 McConnell was their floor general. He was named first-team All-Pac-12 in 2015 when the Wildcats earned their second consecutive top-two seed and reached the Elite Eight.