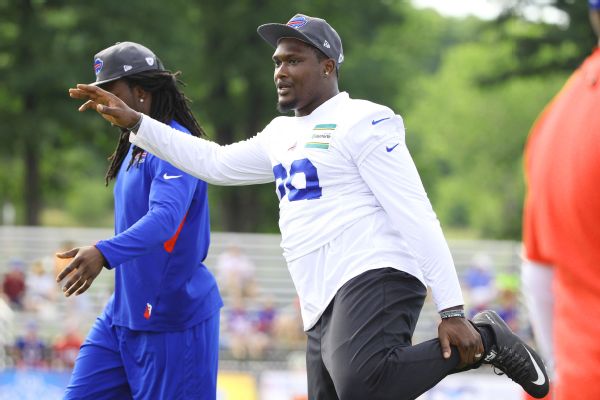 ORCHARD PARK, N.Y. -- The Buffalo Bills are working out free-agent running back Karlos Williams and are expected to re-sign him, either to their active roster or practice squad, a source told ESPN NFL Insider Adam Schefter on Thursday.

Williams, whose workout was first reported by NewYorkUpstate.com, recently completed a four-game suspension as a free agent for violating the NFL's substance-abuse policy. The Bills released the second-year running back in August.

Bills coach Rex Ryan was asked about Williams by reporters on Thursday.

"I think we'll have interest in ... our guys do a great job and we track every player, and if we think Karlos can help us, then he'll be here," Ryan said.

Williams reported to training camp overweight and spent the first two weeks of camp on the active/non-football illness list. Williams' weight went as high as 261 pounds during the offseason, a league source told Schefter. In June, Williams attributed his weight gain to his pregnant fiancée's food cravings.

"I've always said this is a performance-based business," Bills general manager Doug Whaley said Aug. 21. "The release of Karlos Williams was strictly performance-based. He came in behind the eight ball and never caught up. And there was other guys on the roster that moved ahead of him.

"In light of that, we thought, 'Why hold on to him?' Why don't we give him a chance to maybe find another job out there in the league?' We weren't going to hold on to him to the end, knowing he wasn't going to make the team."

Williams worked out for the Jets and Steelers after being released by Buffalo but spent the first four weeks of the regular season out of football.

Bills offensive coordinator Anthony Lynn said Williams wouldn't have anything to prove if he re-joins the team.

"He doesn't have to prove anything to me. He just has to be compliant with the rest of the team," Lynn said. "That's why he's not here right now. Rex [Ryan] asked these guys to come back in in shape and take care of themselves. He didn't do that. Hopefully he learned his lesson, and when he gets his next opportunity, I wish him all the best."