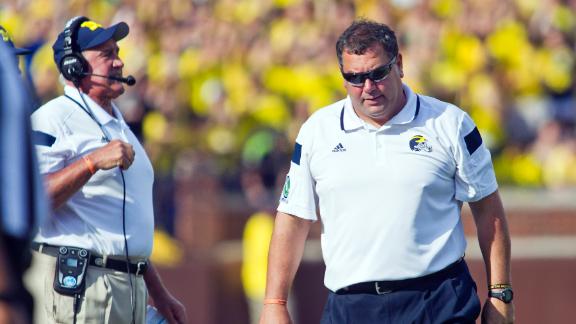 He made it nearly four minutes into his postgame news conference until he fielded the question that's trailed him since Week 2: Do you think you'll have a job in January?

"I don't know," he said. "I don't think about that stuff. I got 115 sons; every day's different. You get distractions all the time. I know we're going to do the right things for these kids."

The fourth-year Michigan coach leaned on platitudes and praised his team for sticking through adversity. He labeled the Wolverines "resilient" but admitted they didn't make enough plays in the 26-24 loss to the Scarlet Knights. He vowed they'll get back to work.

He acknowledged seeing a nice contingent of Michigan fans in the away crowd. But maybe he missed the large neon sign behind his bench, held up by a fan in a matching Wolverines shirt and hat that read "This is NOT Michigan."

"We got great fans, we got a great sport," Hoke said. "We know we've got to do our part. Now, have we been the type of team they want us to be and we want us to be? Believe me, no one wants to win more than the guys in the locker room."

For Michigan, each loss has been tough -- for different reasons. First came the 31-0 defeat to Notre Dame, the most lopsided to the Irish in the series' 127-year history. A lightning-delayed loss to Utah followed, when the Big House emptied so much one player referred to it as the "Ute House." And then came a surprise loss to Minnesota, when the Gophers reclaimed the Little Brown Jug by the largest margin of victory -- 30-16 -- since 1977, when Hoke was a teenager.

Against Rutgers, a controversial officiating decision made the loss difficult to take for Michigan and Hoke, who alluded to it several times in his brief postgame news conference. On third-and-8, on Michigan's final drive, wideout Amara Darboh reeled in what appeared to be a reception near the sideline. It was ruled incomplete. Hoke challenged the call, but it was upheld.

Hoke reiterated after the game he felt strongly it was a catch. Due to the call, kicker Matt Wile instead attempted a 57-yard field goal on fourth-and-8 that was blocked by Rutgers defensive lineman Kemoko Turay. But Hoke bristled at the notion that call might have prevented a win.

"Well, you know, I don't know if that's fair to say," he said. "I think we'll have some conversations [with the Big Ten], yes."

Hoke also wouldn't clarify the status of Michigan backup quarterback Shane Morris, who suffered a concussion last week. When asked if he was available to play, Hoke only would say that Morris was "there" on the sideline.

It hasn't been an easy start to the season for Hoke and these Wolverines. Michigan is 0-4 against teams in the Power 5, and Hoke was forced to pause and think a moment when asked if this past week was the hardest of his head coaching career.

Hoke Not Thinking About Job Security
Michigan coach Brady Hoke addresses questions about his team's tough loss to Rutgers and his job security.