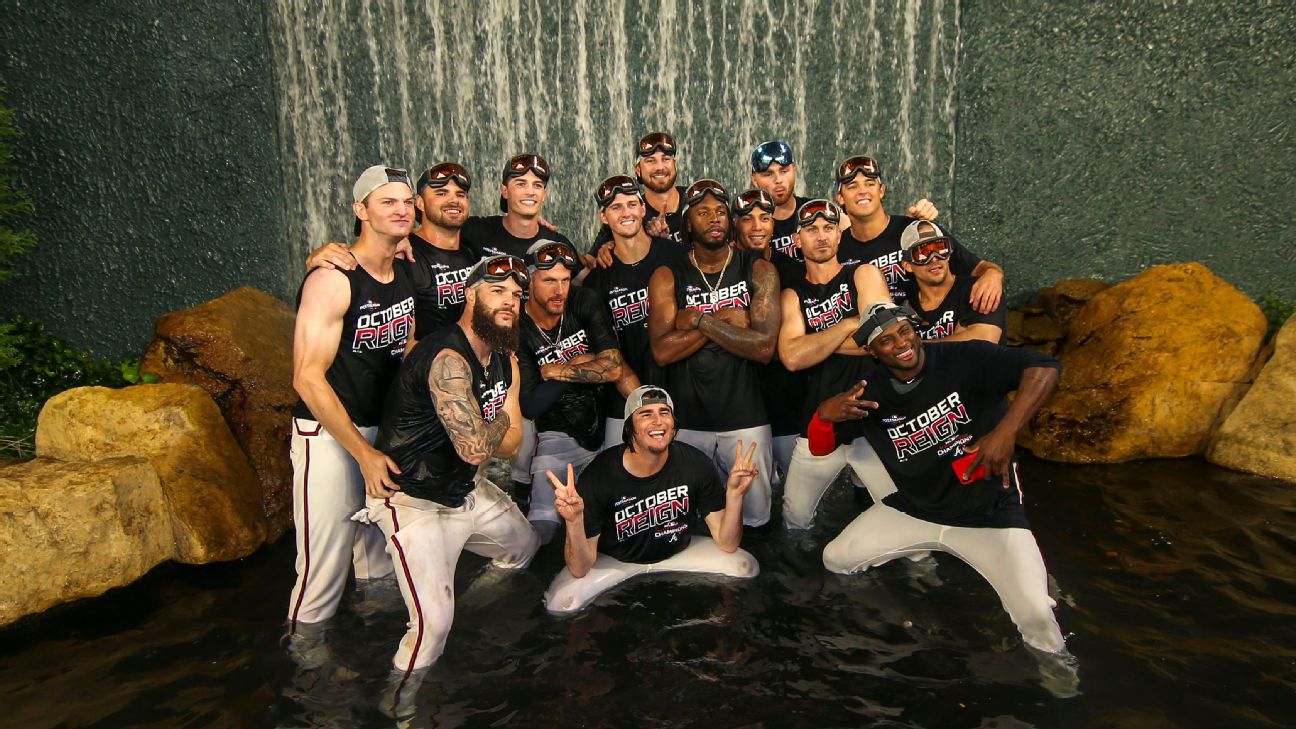 ATLANTA -- One year ago, just winning the National League East was enough for the rebuilding Atlanta Braves.

Even as players celebrated their second consecutive division title with beer and bubbly on Friday night, focus shifted.

"Our first goal was to win the East and we did, and I think now that's not good enough," Snitker said Saturday. "I think our guys know they're capable of a lot more than that. The goal now is the big prize. We feel like we have a team that can do that. We are deep enough, strong enough. I think that is a realistic goal, not just to want to get in but to win the whole thing."

After Friday night's clinching 6-0 victory over the San Francisco Giants, Anthopoulos stood outside the clubhouse doors while the rowdy celebration continued inside.

The GM didn't allow himself to be sprayed. He was looking ahead to the division series starting Oct. 3.

"Kind of by design," Anthopoulos said when asked how he stayed dry. "Hopefully we're doing this after the DS and that's when I'm going to be wet."

The Braves haven't won the World Series since 1995 at Atlanta-Fulton County Stadium, two ballparks ago. They have lost nine straight playoff series since sweeping Houston in the 2001 NL Division Series, including last year's four-game loss to the Los Angeles Dodgers.

Atlanta's only regulars in Saturday night's lineup were Ronald Acuna Jr., Josh Donaldson and Dansby Swanson. Others, including Freddie Freeman and Ozzie Albies, were rested.

Donaldson likely will not start on Sunday. Snitker acknowledged it might be more difficult to hold out Acuna, who is chasing a 40-40 season.

Swanson, however, said he's seeking at-bats after missing a month with a foot injury.

"I need to play," Swanson said. "I missed enough time. I'm still looking for ways to kind of find that groove and get back to where I was before. Each day I'm working to get better and I need the at-bats to continue to boost myself in the right direction."

Swanson said the offseason additions of Donaldson and catcher Brian McCann plus re-signing Nick Markakis put the Braves in position to be a more viable postseason contender.

"I think as soon as the season was over last year everyone was excited to come back and get to work," Swanson said. "With the additions of JD and Mac and having Nick come back really put us in a good position to really win consistently and to be able to do it in a multitude of ways."