Buss complimentary yet noncommittal on Walton 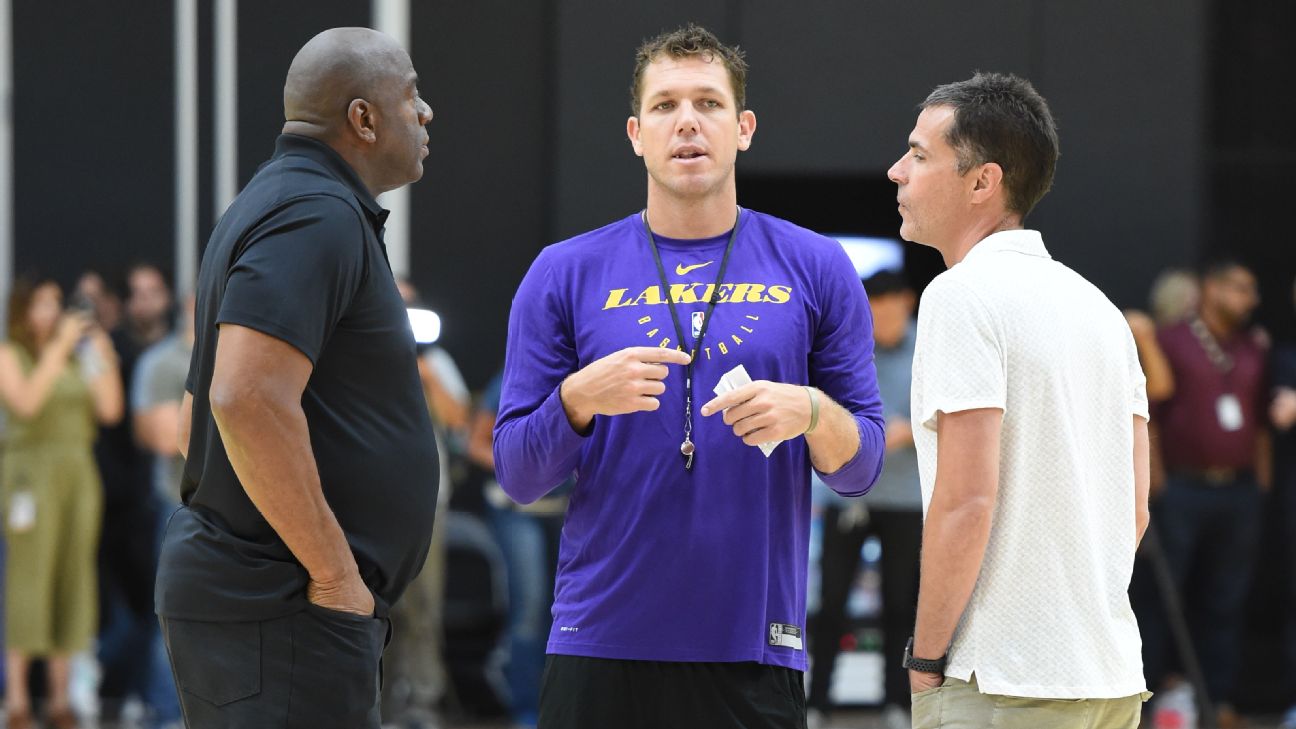 LOS ANGELES --Los Angeles Lakers owner Jeanie Buss sidestepped a question about Luke Walton's future with the franchise during a live podcast taping this week yet made sure to praise the embattled coach.

"I'm not going to give you the answer to that question," Buss said when asked about Walton remaining as coach in her appearance on the Sports Business Radio Road Show on Tuesday at Loyola Marymount University.

Walton, 39, was hired by the Lakers in April 2016 after a successful stint as an assistant coach with the Golden State Warriors under Steve Kerr.

The former 10-year veteran, drafted by L.A. with the 32nd pick in the 2003 NBA Draft, was brought in when Jeanie's brother, Jim Buss, and general manager Mitch Kupchak were running the front office. Less than a year into Walton's time on the sideline, however, Lakers president Magic Johnson and GM Rob Pelinka were hired to replace the previous regime.

While Johnson and Pelinka's ties to the coach are limited, Jeanie Buss used the podcast appearance to detail her relationship with Walton.

"There's a whole other chapter of my life where I was, for 15 years, the significant other of coach Phil Jackson. And Phil used to say, 'Bill Walton may be Luke's dad, but Luke is my son.' ... It was a very Star Wars-y kind of thing," Buss said. "But Luke has always been someone that, he came to the Lakers as a rookie, the last year of Shaq (Shaquille O'Neal) and Kobe (Bryant). So he kind of bridged two Lakers teams in the Shaq-Kobe era and then in what you would call the Kobe-Pau (Gasol) era.

"And he is somebody, I think, who doesn't even realize what a natural he is and that leadership that he has, in terms of getting people, connecting with people and all ages. And I think he's done a terrific job."

Her comments came with exactly one week remaining in the Lakers' regular season. L.A. is limping toward the offseason, with the majority of its impact players finished playing games because of injury. LeBron James (groin), Brandon Ingram (shoulder), Lonzo Ball (ankle) and Josh Hart (knee) have all been ruled out for the rest of the season. Meanwhile, Kyle Kuzma missed the past two games with tendinitis in his left foot, and Tyson Chandler has been out the past five games because of various health concerns.

Buss said she was told that the Lakers' roster lost more games to injury than any other team and suited up the entire squad for just five games all season.

"And that's a challenge for a coach to constantly be changing lineups, and it's hard," she said. "But we were in a position where things were all going in the right way, and we beat Golden State on Christmas Day, which was a great present for me, but then also LeBron (James) got hurt. So it really puts a lot of pressure on the coaching situation in terms of what he's able to do when he's short-handed with players."

Walton has two years remaining on his contract, the first of which is guaranteed.

"I think he is a hard worker, and he is somebody that players gravitate towards, and he's, I think, done an incredible job under a lot of challenging circumstances," Buss said.

Speculation about Walton's job security has been one of those challenges. Just seven games into the season, after a 2-5 start, Johnson admonished Walton for the team's slow start in a meeting and demanded better results. When asked about the meeting, Johnson told the L.A. Times in November, "(Walton) is going to finish the season, unless something drastic happens, which it won't."

It would appear that Walton's status will come down to Johnson's whim.

"In terms of basketball decisions, I will always defer to Magic," Buss said. "He's brought a vision of the kind of team we're going to build and a vision of what Lakers basketball is going to be. And I think you can see that. But we're still building that roster that will get us there."

Buss, whose late father, Dr. Jerry Buss, drafted Johnson to the Lakers when he was a 19-year-old in 1979, said their shared history strengthens their rapport at work.

"We're as tight as any two people, any two executives," she said. "And we have a mission and a purpose of what we want to do, and we're not done yet. But I think we're going in the right direction."

However, Buss said the media coverage of her team this season tested her trust in some of her employees -- she didn't name Johnson specifically -- to the point that she requested 1-on-1 time to measure her belief in them.

Last month, at the MIT Sloan Analytics Conference in Boston, Buss criticized the media's coverage of the Lakers' pursuit of New Orleans Pelicans superstar Anthony Davis as being "fake news," even though Johnson had gone on the record saying the Pelicans negotiated in bad faith.

"Instead of calling the media who were reporting it, I sat down with the people that I work with and had face-to-face communication and realized that that was what we're dealing with now in this day and age, that the stories come so fast and furious that they try and get you off-base. And they get you off from the direction that you're headed," Buss continued on the podcast.

"And you've got to have faith in the people that you're working with and that trust and communication, and that comes with face-to-face time. Because texting and email can lose context and tone. And you need to look somebody in the eyes and really restore your faith and restore your direction. And that's important for leadership."

On the day Buss appeared at LMU, Walton was given the second-best odds to be the Lakers' coach next season (7/1) by BetOnline, trailing Miami Heat assistant coach Juwan Howard (4/1) and tied with former Cleveland Cavaliers coach Tyronn Lue (7/1). But Walton's job status aside. the Lakers have a big summer ahead of them to improve the roster around James. Buss said her front office is ready for it.

"They've got everything plotted out and the goals they're trying to accomplish," she said. "I think people have to realize that -- and basketball fans do, Lakers fans do -- that we have to operate under the rules of the collective bargaining agreement, which means you can't just go and grab every player that you want. You have to do things with a salary cap and plan your contracts and the timing with free agency and budget so you can put the pieces together. So this will be an important offseason for us in regards to that plan." 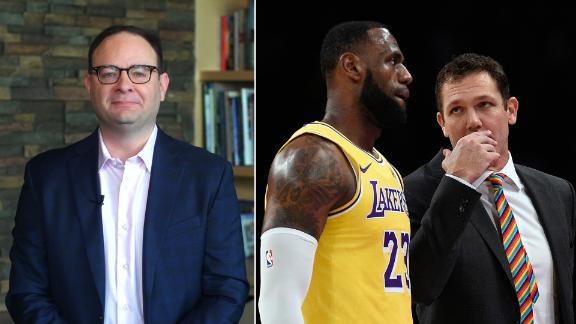 Woj: The Lakers organization is misaligned
Adrian Wojnarowski explains why the Lakers need to find a level of organizational unity if they hope to attract major free agents this summer. 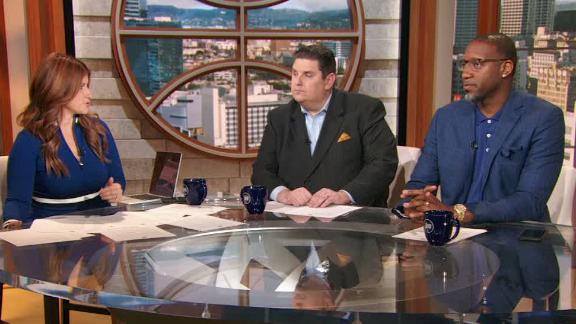