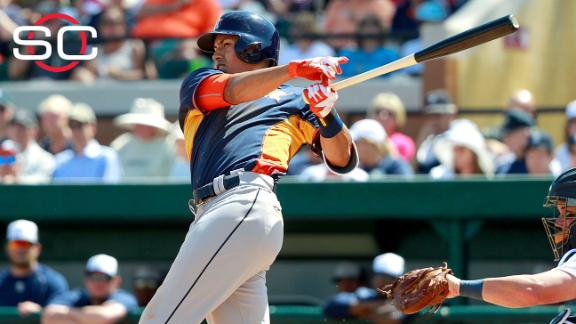 HOUSTON -- The Astros are calling up top prospect Carlos Correa, the No. 1 overall pick in the 2012 draft.

Correa, who will wear No. 1 for the Astros, began the season No. 3 in ESPN MLB InsiderKeith Law's prospectrankings.

The team announced Sunday night that Correa will join the Astros in Chicago on Monday, in time for the opener of a three-game series against theWhite Sox. Correa was with Triple-AFresno after beginning the season with Double-A Corpus Christi and was hitting a combined .335 with 10 home runs, 44 RBIs and 21 doubles with 18 stolen bases.

"We really feel like he can help our club right now win ballgames," Astros general manager Jeff Luhnow said. "We've scuffled a little bit in these last few days, and we feel like Carlos gives us the best chance to win. We want to keep our division lead and we want to win this division. We think he's a big part of what we can do. ...

Velasquez, who was 3-0 with a 1.37 ERA in 26 innings with Corpus Christi, will take Roberto Hernandez's spot in the rotation and start Wednesday against the Chicago White Sox. He began the season 56th among Law's prospect rankings.

Among baseball's most surprising performances is that of the first-place Astros, who, with a record of 34-24, hold a 3-game lead in the AL West despite their current four-game skid. Led by left-handerDallas Keuchel's sensational start -- 7-1 record and 1.85 ERA -- the Astros' starting rotation has been among the finest in baseball, and the team's plus-18 run differential is in the top 10 in the majors.

At 20, Correa will be the second-youngest player in the majors afterToronto Blue Jays pitcher Roberto Osuna. He was drafted out of the Puerto Rico Baseball Academy when he was 17.

"It's a great blessing for Tony to tell me I'm going to the majors," Correa told the Houston Chronicle about receiving the news from Triple-A manager Tony DeFrancesco. "It's an emotion I can't really explain. I'm still in shock."