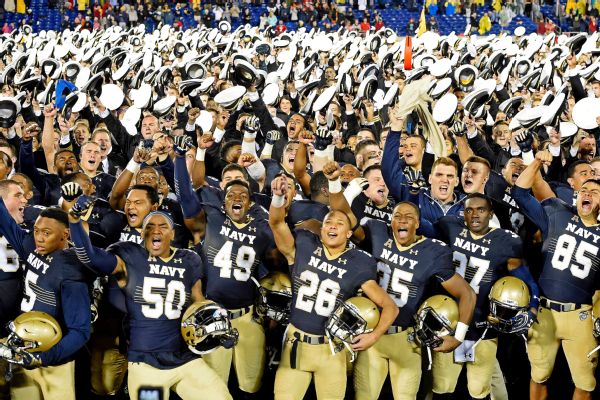 When Navyhosts Templeon Saturday for the American Athletic Conference title game, there will be a large contingent of bowl officials with a rather specific rooting interest.

"I don't want to be un-American," one bowl official said, "but nearly everyone in the bowl industry, quite frankly, is rooting against Navy."

That official technically isn't rooting against Navy, just what happens if Navy wins. That's because if Navy wins the American and is in contention for the Group of 5 bid in a New Year's Six bowl, the College Football Playoff selection committee could delay announcing the highest-ranked Group of 5 champion team until Dec. 10 when Navy plays Army, six days after its final rankings are revealed.

The domino effect on other bowls could "paralyze" the system, a source said.

Delaying the Group of 5's bid to the Cotton Bowl would affect many bowl games involving Group of 5 teams. Officials would have to delay placing teams in bowls without knowing whether a conference champion could get pulled up to the Cotton Bowl. Additionally, opponents in those bowl games wouldn't know whom they were playing in addition to the obvious logistic and financial issues involved with waiting another seven days before planning travel, buying tickets and other factors.

The bowl season begins Dec. 17 with five bowls -- all involving Group of 5 teams. Teams usually arrive to those bowl sites on Wednesday, Dec. 14, so those schools would have little more than a 72-hour turnaround between learning what bowls they are in and traveling to the sites. The short time frame would also likely affect fans' ability to travel and potentially hurt the communities hosting those games, sources said.

In Tuesday's rankings, Western Michigan, which plays for the MAC title Friday, was ranked No. 17, and Navy was only two spots back at No. 19.

"If the committee believes the result of the Army-Navy game could affect Navy's ranking and therefore its place in the playoff or its selection as the Group of 5 representative, only the pairings that affect Army and Navy would be delayed until after the Army-Navy game," College Football Playoff executive director Bill Hancock said.

Hancock would not specify how close in the rankings Navy and the next closest Group of 5 champion has to be to delay the decision.

Not only would a delay affect the Group of 5 teams, but it also would prohibit teams with 5-7 records that qualified with high academic progress rates from getting placed into a bowl until Dec. 10. That's because those teams are awarded bowl bids that couldn't be filled by bowl-eligible teams with a 6-6 record or better. The APR teams will be the last teams placed.

A Temple win against Navy on Saturday would eliminate the Midshipmen from Cotton Bowl contention and allow all of the bowl selections to be announced Sunday. If both Western Michigan and Navy win, sources say the rankings will be delayed.

Some say the nightmare scenario actually would be Western Michigan losing the MAC title game and Navy winning the American. Then the committee likely would have to wait for the Army-Navy result because it's unknown how far Navy would drop in the rankings after a loss to Army. Another Group of 5 champ could potentially pass the Midshipmen, including San Diego Stateor Wyomingin the Mountain West orWestern Kentuckyin Conference USA.

"The bottom line is if the rankings are delayed, it would be a disaster to the bowl system," a bowl official said.

In June 2015, the College Football Playoff changed its rules so that the final rankings would be delayed until after the Navy-Army game if it affected the playoff field or the Group of 5 bid.