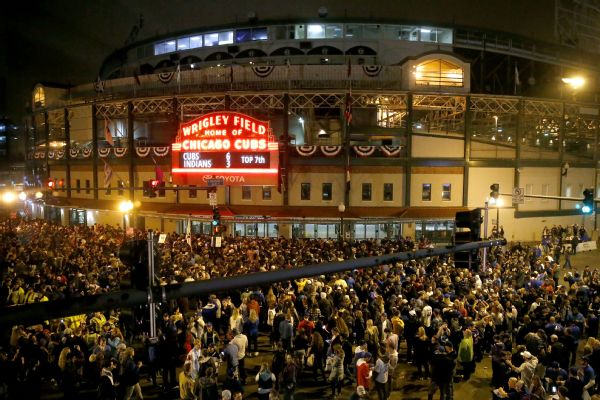 CHICAGO --It has been a long time since Chicago's North Side partied like this.

At exactly 11:47 p.m. local time, the Chicago Cubs won the World Series that has eluded them for 108 years. Fans who packed bars to watch the games on television near Wrigley Field -- neither of which existed in 1908 -- erupted in cheers before swarming onto the streets just before midnight Wednesday to celebrate among the statues of Cubs greats Ernie Banks, Billy Williams, Ron Santo and legendary announcer Harry Caray.

As the game ended, the roar from inside the bars and the throng of fans on the street was deafening; the crowds both inside and out sang "go Cubs go" at the top of their lungs. A little over two hours prior, the Chicago Transit Authority had announced that Red Line trains would be bypassing the Addison station in the ballpark neighborhood known as Wrigleyville. Several buses were also rerouted.

As the celebration progressed, thousands of fans crowded the streets leading away from Wrigley, many of them singing "We Are the Champions.''

Fans hugged one another, many of them crying. They took each other's picture and pictures of themselves. They took turns writing their names and words of congratulations in chalk on Wrigley's brick walls. Some hopped on friends' shoulders to find spots high up on the walls that were not yet covered with names of fans.

According to ESPN's Michele Steele, about 25 to 30 people sneaked into Wrigley Field by climbing the wall. Major League Baseball and the Cubs were made aware.

An hour after the game ended, thousands of people remained in the ballpark neighborhood, and fireworks still exploded every few minutes.

"This was torture,'' said Mike Delmanowski, a lifelong Cubs fan who flew to Chicago from California just to be surrounded by other Cubs fans. "I would not have missed it for anything."

"I am so proud to be a part of it,'' said his wife, Sue, who was crying off and on from the fifth inning onward.

Mike Dillon said all he could think about was his father, who died without ever seeing the Cubs win the World Series.

On Thursday, Chicago Mayor Rahm Emanuel announced that the city would hold a victory parade on Friday. Details are still to come, but it's expected that the route could start at Wrigley Field and end up in Grant Park.

President Barack Obama, a noted Chicago White Sox fan, tweeted that the Cubs' World Series win was "change even this South Sider can believe in," and he invited the team to the White House.

First lady Michelle Obama also posted congratulations to the North Siders: "Go @Cubs, go! Been rooting for you since I was a kid, and so incredibly proud tonight."

Democratic presidential nominee and Chicago native Hillary Clinton tweeted: "They did it! 108 years later and the drought is finally over. Way to make history, @Cubs. #FlyTheW"

The Chicago Blackhawks issued a statement on Thursday that said, "On behalf of our family and organization, congratulations to the Ricketts family and the Chicago Cubs for an incredible season and for winning the World Series. The unwavering loyalty of Chicago sports fans has been rewarded once again with yet another team being crowned world champions. Well done."

Craig and April Likhite drove to Chicago from Evanston, Illinois, with their 10-year-old son, Cade, because they wanted to see history made with other Cubs fans.

"To finally see this in my lifetime with my son here with us, it means everything," Craig Likhite said. "This game with all the ups and downs showed him exactly what it is to be a Cubs fan."

"My dad passed away this year. He would have loved this," added Likhite, 50.

Liz Wolfe, a 36-year-old physical therapist, said, "People always said if the Cubs win the World Series, it would be like hell freezing over. I'm still in shock. This is the most exciting thing in my life."

Longtime Cubs fan Bob Newhart, who grew up in the Chicago area, tweeted his congratulations to the team.

"The billy goat is dead!! As I've said, from the beginning, I'm getting too old for this!'' the 87-year-old comedian wrote, alluding to one of the oldest alleged curses on the team.

The Cubs' 8-7 extra-inning victoryin Game 7 over theIndiansat Progressive Field in Cleveland followed the emptiness and bitterness of years past, when the Cubs found spectacular and sometimes downright strange ways to snatch defeat from the jaws of victory.

Every Cubs fan knows those stories, starting with the 1969 team loaded with Hall of Famers that amassed a 9-game lead in mid-August before it started losing game after game. The MiracleMetsnot only caught them but ended up winning the National League East by 8 games.

Then came 1984. After taking the first two games of the National League Championship Series against thePadresat Wrigley, the Cubs needed just one win in San Diego to advance to the World Series. They were swept in three games on the West Coast.

There were other playoff losses, but none as painful as in 2003, when Cubs fan Steve Bartman deflected a foul ball that seemed destined for Moises Alou's glove. The Cubs were just five outs from reaching the World Series; fans watched in horror as the Cubs fell apart. They went on to lose Game 7 the next night.

But that was all in the past, as Cubs fans throughout Chicago celebrated into the early hours of Thursday.