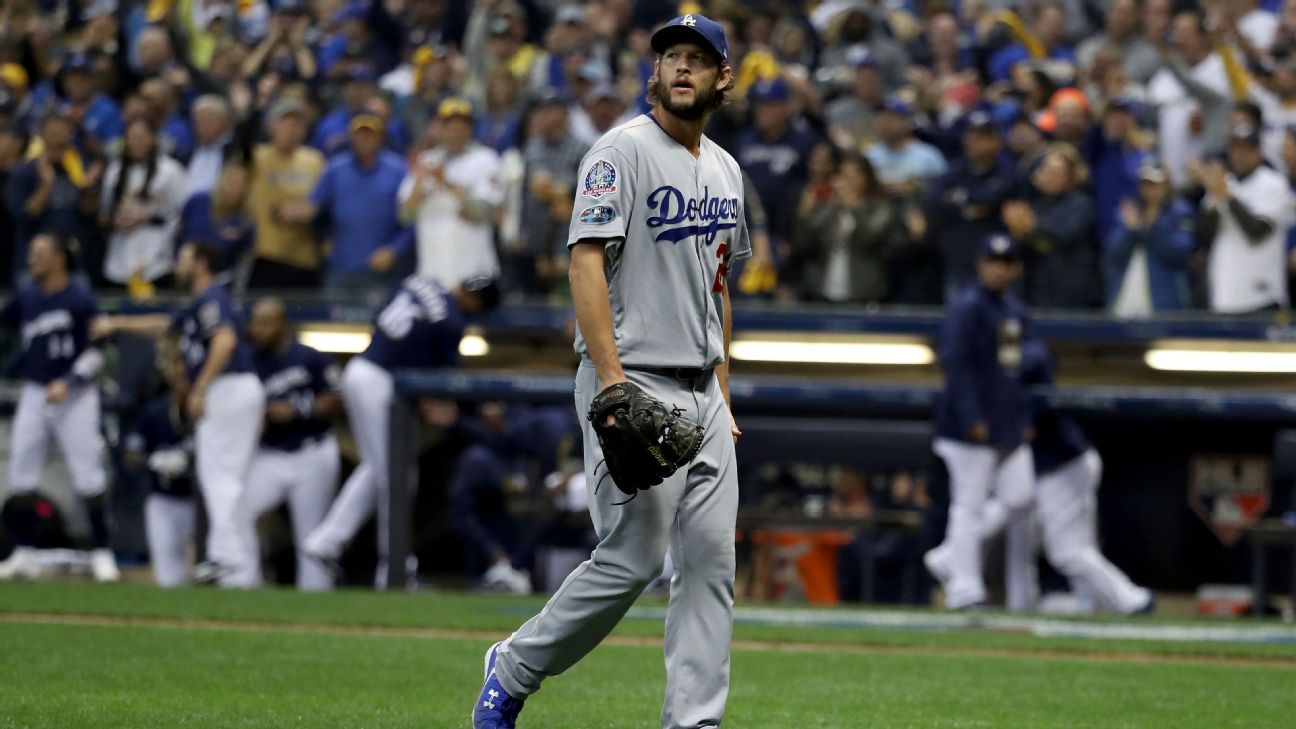 MILWAUKEE -- Clayton Kershaw stared toward right-center field with his mouth agape and his eyes hollow, the sort of look one gives when the improbable takes place.

Woodruff hit a lot, becoming only the third relief pitcher to homer in a postseason game, according to ESPN Stats & Information. Kershaw was charged with five runs (four earned), six hits and two walks in three-plus innings, one week after allowing only two baserunners in eight masterful innings against the Atlanta Braves in the first round.

His catcher, Yasmani Grandal, had just as bad of a night.

There was the catcher's interference on Jesus Aguilar's liner, loading the bases while negating a miraculous diving catch by fill-in first baseman David Freese. And there was the dropped relay throw after a tying sacrifice fly, allowing two runners to advance.

Grandal said he was most irked by the thought of disappointing Kershaw.

"He's out on the mound competing as much as he possibly can, and we pretty much just let him down," Grandal said. "I think that's the biggest thing."

Kershaw needed 23 pitches to escape the first and 29 pitches to escape the third. He absorbed 70 pitches before recording his 10th out, 15 fewer than what was required of him for 24 outs in his previous start. He escaped the first without damage, worked around a two-out single in the second, then threw a 2-2 fastball right down the middle to Woodruff to begin the third.

It marked only the fourth time in more than 2,228 career innings that Kershaw had given up a home run to an opposing pitcher, and the first time in the playoffs. Woodruff, who picked up his second home run in 19 career at-bats, became the first left-handed pitcher to homer against a left-hander in the playoffs, and the first to homer against a former Cy Young Award winner since the 1970 American League Championship Series.

Kershaw threw 500 pitches to lefties during the regular season, and only 13 carried an exit velocity higher than the 101.3 mph off Woodruff's bat.

"I was just trying to look heater and trying to foul it off or put it in play," Woodruff said. "I just got lucky."

The home run was only the beginning of the onslaught against Kershaw. He followed by giving up a single to Lorenzo Cain and a walk to Christian Yelich. Three batters later, Hernan Perez came up with a go-ahead sacrifice fly. The first three batters reached to start the fourth -- on a walk by Manny Pina, then back-to-back singles by Orlando Arcia and Domingo Santana -- prompting Kershaw to exit with none out and a four-run deficit.

"We gave up too many bases," he said. "We didn't play clean when he was in the game. The errors affected the game. But as far as Clayton, I just think it was poor execution. I thought the stuff was good, but he just made mistakes in the strike zone, and defensively, again, we didn't do him any favors."

Chris Taylor booted Arcia's fourth-inning single to left field, gifting the Brewers two free bases, and Justin Turner misplayed a slow roller by Cain in the eighth, making the Dodgers the first team in postseason history to commit four errors and two passed balls in the same game, according to research from the Elias Sports Bureau.

Grandal pored through film after the game but not of his catching.

He quickly diagnosed the cause of his passed balls.

"It's a byproduct of being flat-footed," said Grandal, who has 27 passed balls since the start of last season, trailing only the New York Yankees' Gary Sanchez for the major league lead. "At times I don't feel it, but I think I get on my heels. When you get on your heels, you can't do anything. You can't move."

Brewers P Woodruff homers of Kershaw
Brandon Woodruff becomes the third relief pitcher in MLB history to hit a home run in the postseason, with his game-tying home run off Clayton Kershaw.