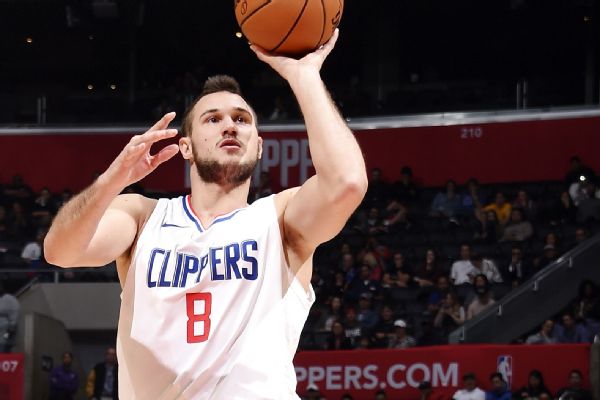 LOS ANGELES -- An MRI showed that LA ClippersforwardDanilo Gallinari has a non-displaced fracture of his right hand and will be out for at least two more weeks, the team said Friday.

The latest injury leaves the Clippers struggling to fill out a lineup as they head into the stretch run of the season, fighting for a playoff spot.

Gallinari had missed LA's previous three games with what the team initially called a right hand contusion suffered at Golden State on Feb. 22.

"Did an MRI, you know, it's not really an update," coach Doc Rivers said. "They're still evaluating it. I don't think he's going to be back soon. But I think he'll be back."

Gallinari, in his first season with the Clippers after spending his previous nine NBA seasons in New York and Denver, has had an injury-plagued season. He has played in only 19 games, missing chunks of time earlier in the season due to two separate glute injuries.

The Clippers were 32-28 and just outside of the top eight in the Western Conference entering Friday's game against the New York Knicks. Injuries to Gallinari and trade acquisition Avery Bradley (week-to-week with a groin/hernia injury) have just been the latest complication for Rivers, who has had to start an NBA-high 29 unique lineups.

"The problem is right now, how many games do we have left? With 22 games left, and we're trying to get into the playoffs, not having [Gallinari] and Avery, it's tough," Rivers said. "But no one is going to feel sorry for us. I tell our guys that every single day. In public, I've said that every single game. And you just have to find a way."

Complicating matters further is the fact that the Clippers' two-way contract players have been starting. C.J. Williams started in place of Gallinari on Friday, while Tyrone Wallace has served as a starter since the All-Star break ended. But Wallace's 45 days are up, and Williams' will be up after the Knicks game.

"It's a mess. It's tough," Rivers said about the two-way contract situation. "Ty, his 45 days has run out. CJ's runs out today. We're starting our 45-day guys. And they've run out of days. So honestly, I'm at a loss for words, I don't know what we're going to do. I know we're trying to sign one of them and see what we can do, but right now, none of that's working, so we just have to get more players. We have to get one of those guys or someone in quickly. We don't have enough guards right now to play. So we need one."

"What's not working now is we gotta figure out which one we can sign and how we can sign them," Rivers said of Williams and Wallace. "But as far as ... we're the prototype ... there's never been a better use of 45 days than us.

"They've saved our season, those two guys. And it's been great to have them. Both of them have been unbelievable. To do all the flying, and stuff that they've had to do to play a game so we can save days, they don't complain -- we throw them on the toughest guys at night. You think about it, C.J. hadn't played with us in a month and we start him on [James] Harden. What stupid coach thought of that? That clearly didn't work, but we were willing to try it. And that's what's been great about our group. They're a good group to coach."
Report a correction or typo
Related topics:
sportsespnclipsla clippersdanilo gallinaridoc riversnba
Copyright © 2022 ESPN Internet Ventures. All rights reserved.
TOP STORIES
Woman killed in 'targeted ambush' at her birthday party in Inglewood
LAUSD to require students to wear non-cloth face masks starting Monday
5 tax changes that can boost your refund this year
Millions of at-home COVID tests at Monterey Park warehouse backlogged
Rams advance to NFC Championship with win over Bucs
VIDEO: Amazon driver comes face to face with bear during delivery
Activists call for reward after teen found dead along South LA freeway
Show More
COVID hospitalizations decrease in LA County for third consecutive day
COVID testing mega-site set to open in Beverly Hills
Video shows wild street takeover near Fairfax District
Fraudulent COVID testing sites shut down in South Gate, Bell Gardens
High winds topple massive trees in La Verne; public park red-tagged
More TOP STORIES News