Clippers have found their identity, but how long will it last? 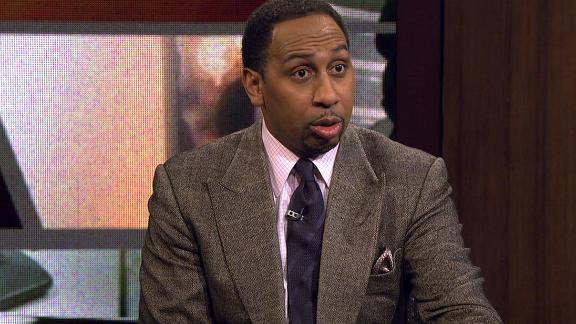 LOS ANGELES -- As Blake Griffin summoned the crowd at Staples Center to hitch its emotional pulse to his on Monday night -- "C'mon! C'mon, man! F--- them!" Griffin yelled, raising his arm like a conductor leading an orchestra to a climax -- he cast his team's identity into focus.

The LA Clippers were wrapping up a chippy win over Houston -- their fifth in a row overall -- and Griffin was invigorated by a night's worth of aggressive bumps, entanglements and assorted other pleasantries. It was an update of Blake Griffin 1.0 -- confrontational basketball that's physical by design, and fueled by nervous energy.

The fact that this is a such a novel statement in Clipperland speaks to how radically the mood and light around Griffin and the team have altered. The Clippers have revealed themselves as a team of loose vets and plucky overachievers that revels in adversity, sweats none of the small stuff, and likes going to work. This is the kind of team that can start 16 different players, that can patch holes with solid production from undrafted castaways, second-rounders and spare parts from theChris Pauldeal, while it nurses the absences of Patrick Beverley for the season, Milos Teodosic for seven weeks, Griffin for a month, Danilo Gallinari and Austin Rivers for who knows how long.

And it's the kind of team that enjoys its own company while reveling in a defining win as the other team goes on an emotional bender. In recent seasons, the Clippers didn't need outside agitators to detonate an explosion inside their own locker room, so the appearance of Trevor Ariza at the threshold of the rectangular inner sanctum where players' lockers are assembled on three sides was a departure. One player Tuesday characterized the standoff as "just posturing," as players on both sides traded barbs before support staff and team security intervened. As the scene cleared, the Clippers realized they'd experienced yet another catalyzing event -- similar in scope if not substance to their short-handed win over a then-sizzling Rockets team in Houston just before Christmas, a game they entered 12-18.

"It's a fun team, man," Griffin says. "Everybody trusts and enjoys playing with each other. It's fun to play a game like [Monday night] in an emotional atmosphere like that, and not run from it. It's fun trying to win games however we can, whether there are injuries. And it's fun figuring it out as we go."

There are few things more powerful for a team of players than the collective act of figuring out who they are, then realizing they like that self-image. For Griffin, a key member of a Clippers team that, for years, had loathed what it was and what it had failed to do, this newfound identity has been a revelation.

"We're growing together as a team, instead of starting out the season close and growing apart, which is kind of the opposite of how we did it in past years," Griffin says.

For all the melodrama and disappointment, those previous seasons produced consistent 50-plus win basketball over a sustained period. BPI projects these Clippers to finish with only 38 wins. Yes, the Clippers are doing more on the floor with less in recent weeks, and Griffin hasn't been happier in years. Unfortunately, there's no award in the NBA for best makeover. The Clippers might be self-actualized on the floor, but they face a more uncertain future than at any time since the Baron Davis era.

With less than five months as a managerial unit under its belt, the front office must decide whether to trade the Clippers' longest-tenured veteran and best defensive presence, DeAndre Jordan, and its most lethal perimeter scorer, Lou Williams. These are decisions fraught with tripwires.

With Jordan, who can opt into the final year of his deal this summer for $24.1 million, the considerations are dizzying. What kind of long-term deal is he looking for? Would he be willing to opt into that final year for the right team, a decision that could help improve the market for the Clippers? Given Jordan's history, can his potential suitors construct a long-term plan based on his stated intentions in the winter of 2018? What kind of market exists for Jordan in the first place, particularly if, say, Marc Gasol becomes available? If it's weak, are the Clippers better off making an offer of their own they deem reasonable in length and dollars? To navigate the landscape, the Clippers will work with Jordan's new agent, Jeff Schwartz, who will gauge the depth of interest.

Williams, on the final year of his contract at $7 million, is at his peak value as a basketball player. He also has been indispensable to the team's success, and trading his contract for a future asset probably means the Clippers will lose more games this season. But would the Clippers say no to a lottery-protected first-round pick for a 31-year-old guard on an expiring deal? What would the exodus of a respected veteran who has all-out balled the Clippers back into the playoff picture do for morale?

After serving as team president in the NBA's coveted "dual role" of lead basketball executive and head coach, Doc Rivers is now a mere mortal in the first chair, a job for which he's under contract through the summer of 2019. Sources with knowledge of the Clippers' thinking say owner Steve Ballmer is eager to see what Rivers can do as a coach with more limited talented. With the Clippers playing a spirited brand of basketball after (and even amid) their late-autumn swoon, the powers that be have entertained no serious thoughts of a midseason shakeup.

The brass will have to measure the feasibility and degree of difficulty of virtually every potential path forward. It's a set of outcomes that ranges from sticking with a group whose grit and resolve it loves at a time when the organization wants to delineate a new Clippers culture, to stripping both roster and bench clean and heading into the June draft in a world where every member from Griffin on down is available for future assets. These measurements can be considerably harder when a franchise still is figuring out who it wants to be and what it values the most.

Rebuilding while remaining relevant is a task only the most competent front offices can master -- and even then a team needs some luck. Until further notice, the Clippers seem intent on pursuing this strategy with a deep front office.

Lawrence Frank presides as the senior basketball operations exec in only his second season in management. He's supported by general manager Michael Winger, formerly of Oklahoma City, an exec regarded as one of the more capable young technocrats in the NBA strong on process, preparation and culture. Former Cavs executive Trent Redden, a strong personnel and scouting evaluator steeped in practical NBA knowledge, also was added to the staff. Jerry West also joined the brain trust as a consultant. These hires might seem routine, but the Clippers historically have played from behind with regard to both human and monetary resources.

Playing catch-up, the Clippers have implemented after-action reviews to evaluate how the structure performed in a free-agent negotiation or in identifying and signing two-way talent. They're creating opportunities for healthy debate prior to decision-making that didn't previously exist. They're looking at every facet of the organization, from the way scouting information is compiled to running cost-benefit analysis for programs they might want to implement two years from now. These best practices have been commonplace for NBA teams for more than a decade, but much of it is new in Playa Vista.

In the meantime, Clippers management forges ahead with the kind of self-exploration that Griffin, the vets, the Rockets' remainders, the second-rounders and the grinders are deep into. For the suits, some of those tasks are administrative, but a lot of it is just assigning purpose where there wasn't any. Over the summer, Frank and Winger observed that the photos and illustrations on the walls around the training facility were nothing but a random set of images -- a picture of a hoop, a building from the Los Angeles skyline.

"They didn't tell a story," Frank says. "They didn't say anything. We decided that from now on, anything we put on the wall in the practice facility has to have a purpose. It has to mean something."

The Clippers went to work specing out new images for the walls, but after some spitballing and considering a few one-off choices, they've decided to leave the space blank for the time being until they can identify a larger, unifying theme.

"Rather than just put something up," Frank says, "let's figure out who we are and what we're really about."