LA Clippers guard Lou Williams said he was grieving the loss of a mentor for weeks, but that was overshadowed by his decision to stop to eat at a gentlemen's club after attending a viewing.

The reigning Sixth Man of the Year spoke for the first time since emerging from a 10-day quarantine for visiting what he says is one of his favorite places to eat -- Magic City in Atlanta -- during his excused family-emergency absence while outside the NBA bubble in Orlando, Florida.


"In hindsight, I think as far as the public safety issue goes, I probably could have made a better-quality decision," Williams said after finishing with 7 points, 6 assists and 6 rebounds against the Phoenix Suns in in his first game out of quarantine. "I was a little nave in that aspect. I went somewhere after a viewing of somebody I considered a mentor, somebody I looked up to, first Black man I seen with legal money in my life."

Williams explained that the funeral home he went to for the viewing of Paul G. Williams, the father of one of Lou Williams' friends, was close to Magic City, where he said he often eats.

"It's been documented how much I talk about this place, how much I eat there," said Williams, who missed the Clippers' first two games of the NBA restart. "I just did something that was routine for me. I frequent that place at that time of day, 5:30, 6 in the afternoon.

"At the time, I thought I was making a responsible decision. After looking back on it, with everything going on in the world, the pandemic, maybe it wasn't the best-quality decision. I chalk it up as that, take my L and keep moving."


Williams, though, made it clear that he, Patrick Beverley and Montrezl Harrell all left the Clippers within a week in July for serious "real-life issues in the world." Beverley returned and went through a four-day quarantine before playing in the Clippers' first three seeding games. Harrell, though, left on July 17 and has yet to return, missing the first three seeding games as he mourns the loss of his grandmother.

Clippers coach Doc Rivers said there was no update on a timetable for Harrell's return and that the power forward can take as long as he needs to grieve.

"It's extremely difficult, man," Williams said. "I truly was grieving two weeks ago. I was really going through something. I was thrown under the bus, you know what I'm saying? ... All the attention turned to Magic City because it's a gentlemen's club. I feel like if I was at a steakhouse or Hooters or whatever, it wouldn't be half the story.

"I pray and I really hope these fans understand what Trez is going through while he's away, so when he come back, people don't have a lot to say. Pat went through the thing with his family. I went through my thing. We're having real-life issues in the world. It's on front of a page to see the decisions you make outside of that. It's difficult. It's part of the landscape. You understand that. People are going to say their things, they're going to print their things, imaginations are going to run wild. You deal with these things and keep moving." 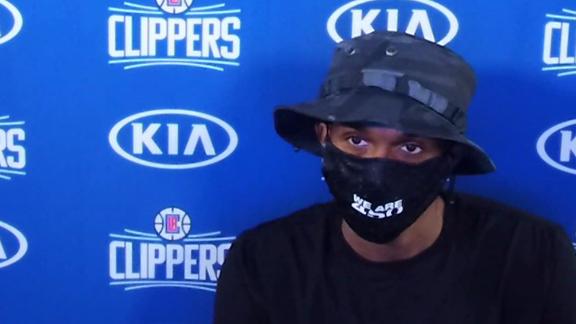