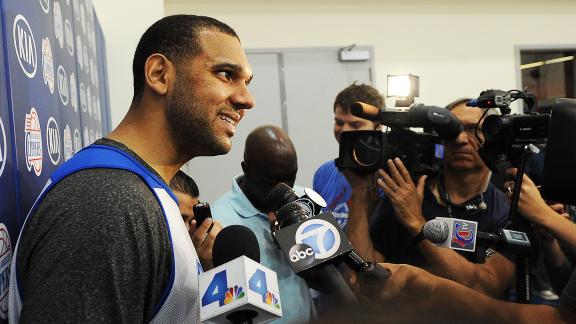 LOS ANGELES -- The Los Angeles Clippers have traded Jared Dudley and a 2017 protected first round pick to the Milwaukee Bucks for Carlos Delfino, Miroslav Raduljica, and a 2015 second round pick.

The Clippers had tried to trade a package of Dudley and a first round pick multiple times this offseason in the hopes of acquiring a swing man and/or a big man and will get both in the deal from Milwaukee.

Delfino missed last season after suffering a fractured bone in his right foot during the 2013 playoffs with the Houston Rockets. He signed a two-year, $6.5 million contract with the Bucks last offseason and was hoping to return last season before needing additional surgery.

The 31-year-old shooting guard/small forward averaged 10.6 points and 3.3 rebounds for the Rockets during the 2012-13 season but was a regular starter the previous three seasons with the Bucks where he started 159 games and made 178 appearances.

The Clippers had high hopes for Dudley after trading Eric Bledsoe and Caron Butler in a three-team deal that netted them J.J. Redick and Dudley last summer. Dudley, however, struggled and had the worst shooting season of his career.

"Jared is a great teammate, I thank him for all his hard work on and off the floor on our behalf," Clippers president of basketball operations and head coach Doc Rivers said in a statement. "Jared is a true professional and we wish him all the best in Milwaukee."

He averaged 6.9 points and 2.2 rebounds while shooting a career-low 43.8 percent from the field and 36.0 percent from three-point range. Dudley had two years and $8.5 million left on his contract and the Clippers had been trying to trade him since last season's trading deadline when he fell out of the rotation.

The second round pick the Clippers will receive in the trade is the pick they initially traded to Milwaukee as part of last year's three-team deal for Dudley and Redick.