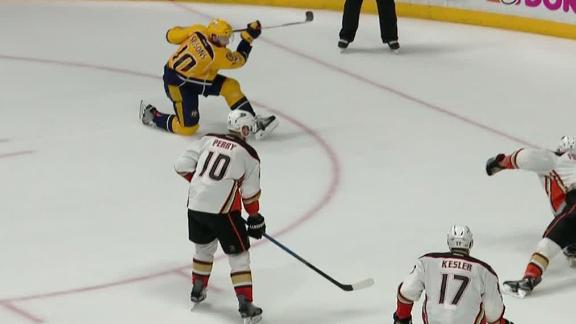 After their 18th season, the Nashville Predators are finally heading to the Stanley Cup finals. They eliminated the Anaheim Ducks with a 6-3 win in Game 6 on Monday, thanks in large part to a timely hat trick from Colton Sissons, who entered the game with two career playoff goals. Sissons' memorable evening was made possible by Predators goaltender Pekka Rinne, who carried Nashville for long stretches in this series and ended Game 6 with 38 saves.

How it happened: Anaheim controlled the play much of the night, but the Predators consistently found ways to answer. It didn't take long for the fans at Bridgestone Arena to realize that it would be that kind of night.

The Ducks came out flying, firing the first three shots of the game, including one from Andrew Cogliano that forced Rinne to sprawl post-to-post to make a big stop. Nashville answered when Austin Watson's shot deflected off Brandon Montour past Jonathan Bernier to open the scoring just 81 seconds into the game.

Sissons' second of the game appeared to give Nashville a comfortable 3-1 lead three minutes into the third, but Anaheim answered when Ondrej Kase and Cam Fowler scored 3:52 apart.

The Ducks had a chance to take the lead when Roman Josi wristed the puck over the glass to earn a delay-of-game penalty with 8:03 remaining in the third. The Ducks failed to capitalize, which made them 2-for-18 with the man advantage in the series, and Sissons completed his hat trick by notching the series-clinching goal just three seconds after Josi left the box.

Pekka Power: Rinne's incredible postseason is now the signature moment in a remarkable career by a player who was taken with the final pick of the eighth round in the 2004 draft. For what it's worth, the NHL draft was shortened to seven rounds in 2005.

In the last three games of the series, Rinne stopped 104 of 111 shots for an impressive .937 save percentage. His play made the absence of Ducks goalie John Gibson even more glaring. Gibson had a .939 save percentage in the series before he was sidelined with a hamstring injury, and Bernier, his replacement, allowed four goals on his first 21 shots. Bernier ended the postseason with an .824 save percentage and simply could not make a big stop when the Ducks needed one most.

What's next: With the win, the Predators advance to the Stanley Cup finals. They'll open the series on the road against either the Pittsburgh Penguins or Ottawa Senators on May 29. Ottawa hosts the Penguins, who lead the Eastern Conference finals 3-2, on Tuesday night at Canadian Tire Centre.