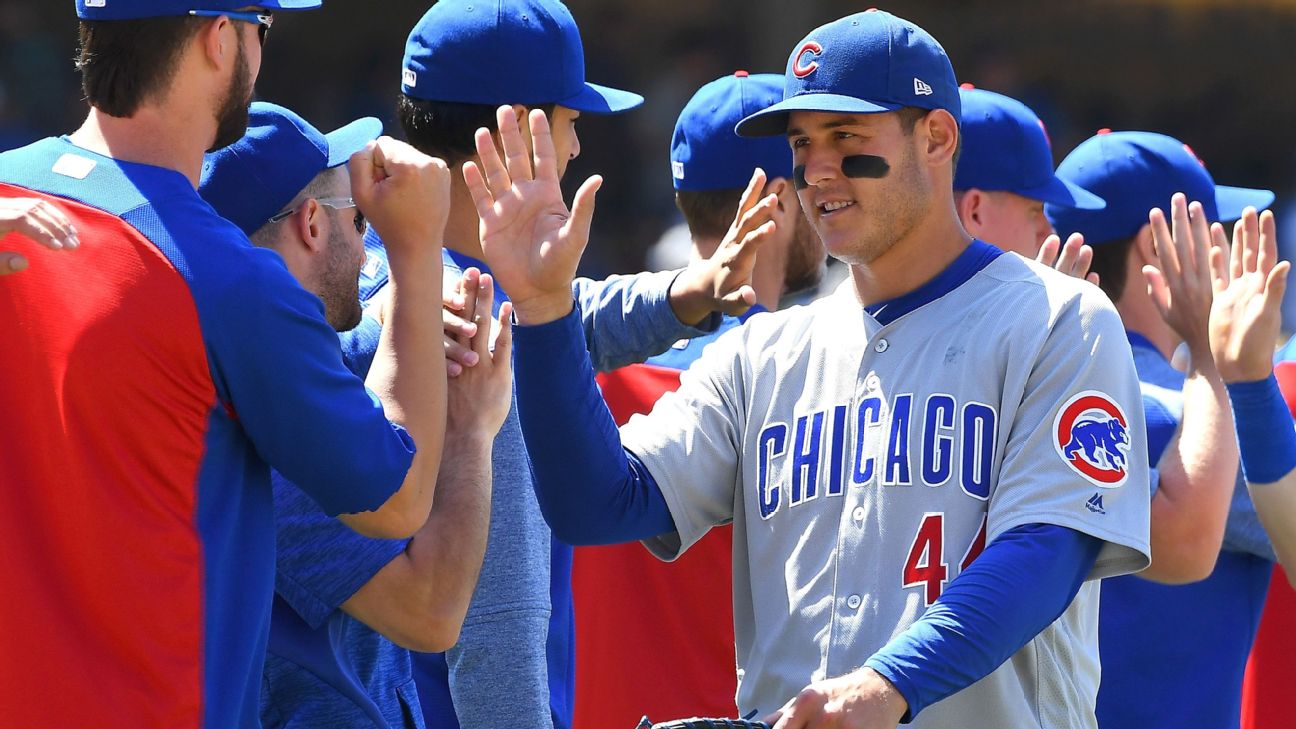 "The Reds are screwing this whole thing up," Maddon said before the Cubs' 11-5 victory over the Los Angeles Dodgers on Thursday. "They're the ones that screwed this whole thing up because, overall, take that series away from Cincinnati, this has not been a bad stretch at all."

Of course, that was said with some sarcasm since you're not allowed to take series sweeps away, but the Reds are on fire right now, while the Cubs have been grinding away with some decent results in recent weeks. Two matchups with the Dodgers over the past 10 days are good examples. Los Angeles already has tied the franchise record for home runs in June, yet the Cubs won four of the teams' seven games.

In fact, going back to the beginning of the month, the Cubs had taken four of five series before being swept four straight in Cincinnati. Still, they stayed the course. After losing Game 1 against the Dodgers on Monday, the Cubs took two of the next three.

"I don't think anyone hangs their head," Anthony Rizzo said of a losing streak.

Thursday worked out in their favor, in part, because lefty Clayton Kershaw is still working his way back from an injury. When he left after five innings, the game tilted in the Cubs' direction, highlighted by a seven-run seventh inning. Rizzo had four hits on the day after getting the night off Wednesday.

"I need to give him more days off," Maddon said. "I need to be proactive in front of him, giving him days off."

When told of Maddon's idea, Rizzo smirked. He knows his manager is probably right. "I definitely needed that day off," Rizzo said. "Joe is so good at sensing that."

Speaking of rest, Maddon will continue his usual rotation, even as the Cubs come home -- and with two off days approaching. Temperatures are supposed to be in the high 90s in Chicago, making it an easy sell for him. And while the schedule worked against the Cubs over the past eight days, it should turn in their favor. In addition to being home, with the scheduled days off, the Cubs take on two sub-.500 teams from the American League Central in the Twins and Tigers. They play in the worst division in baseball and will be without a designated hitter at Wrigley Field. Advantage, home team.

"It's a nice stretch for us," Rizzo said. "This is definitely what we look forward to. This wasn't the easiest road trip."

Four games in Cincinnati followed by four in L.A., three time zones away, isn't easy -- and neither will returning two time zones for a late-afternoon affair against Minnesota on Friday. In true manager form, Maddon refused to look at the records of the Cubs' upcoming opponents, instead focusing on what could bite them.

"Groups that have come in [to Wrigley] for the first time in a while really dig on coming in there and feeling the energy too," Maddon said. "So we have to be on our best behavior."

In fact, a large contingent of Twins fans is expected in Chicago, making it one of the hardest tickets of the season, but that's all small stuff compared to the grind the Cubs just went through. And though there is still uncertainty with pitcher Yu Darvish, the team is beginning to get healthy.

Brandon Morrow returned this week, while Carl Edwards Jr. is starting a rehab assignment in the minors. Next up, Kris Bryant (shoulder) should be swinging a bat again with his return due early next week, right in time for the Miguel Cabrera-less Tigers. Detroit is weathering an off-field storm regarding the firing of former Cubs pitching coach Chris Bosio, another reason the Cubs should pounce.

"My biggest concern is we have to get the band back on the field together at one time," Maddon said of his walking wounded.

In the meantime, they can relish the fact they scored 11 runs in a game Kershaw started and scored a total of 26 runs in the series, an area that has been a problem for the Cubs when facing the Dodgers over the past few seasons. That's not lost on the manager.

"We were using the whole field," Maddon said of Thursday's 15-hit performance. "We're talking about power and oppo[site field] and ground balls up the middle. Just really great approach."

If the season series were a playoff matchup, the Cubs would have won 4-3. But June isn't October, though the thought of a third postseason battle is too juicy not to imagine. The teams are 1-1 facing each other in each of the past two National League Championship Series.

"Do the eyeball test," Maddon said. "Us and them on the field when the game begins. Normally, it's going to come down to who pitches better. On the field, cannot be more even."

Perhaps it's not the Dodgers the Cubs should be measuring themselves against anyway. Those pesky Reds were a "fly in the ointment," Maddon declared before Thursday's game. Winners of nine of 10, and a .500 team since Jim Riggleman took over, the Reds proved they were no fluke. And guess who's coming to town after those woeful AL Central teams? It's safe to say the last-place team in the Cubs' division has their attention.

"If we get away with this one today and move it back home, it's actually not a bad stretch for us, other than that one series," Maddon said Thursday morning.