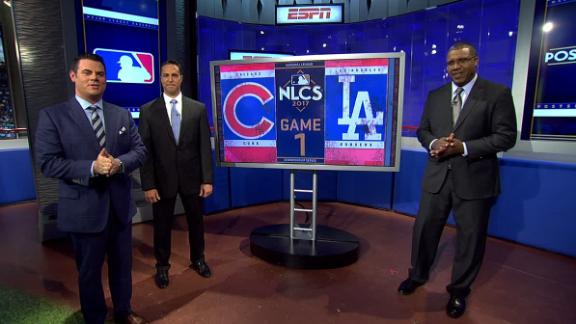 It turns out there was good reason.

Left-hander Jose Quintana, who got the nod in Saturday night's opener, stayed with his wife overnight Friday in New Mexico, according to USA Today Sports, which reported that it wasMichel Quintana whose medical issue caused the Cubs' team planeto be diverted to New Mexico during a flight to Los Angeles.

"It was nothing major," Quintana's agent, Mevin Roman, told USA Today Sports, referring to Michel Quintana's health issue. "She's OK. It was just an irregular heartbeat. She is fine."

The Cubs had been mulling the possibility of going with fifth starter John Lackey, who didn't pitch against the Washington Nationals in the National League Division Series, in Game 1. Quintanapitched 2/3 of an inning in relief in the Cubs' Game 5 clincher Thursday.

One day earlier, the Cubs' flight was diverted to New Mexico due to the medical issue on board. The plane was on its way to California again within a few hours.

At the time, the Cubs said the person was a player's family member, and multiple reports said the condition was not life-threatening.

"Nobody complained,'' Cubs manager Joe Maddon said. "It was an empathic moment. Everybody understood what's going on. As a human being, you're concerned for other human beings, so I thought our guys were wonderful the way we handled the entire situation.''

Maddon didn't announce his starting pitcher for the opener until Quintana confirmed he would have no problem taking the mound for the third time in six days in the first playoff appearances of his big league career. Quintana started Game 3 of Chicago's NL Division Series against Washington, and he threw 12 pitches in relief during the Game 5 clincher on Thursday.

"I really respect Q's word,'' Maddon said. "He said he's ready to rock and roll, so we believe him.''

The lefty was on a roll early against the Dodgers before allowing two runs in the fifth inning. He didn't factor into the decision as the Cubs lost the NLCS opener, 5-2.

The Dodgers announced their rotation Friday; ace Clayton Kershawtook the mound in Game 1. He will be followed by Rich Hill,Yu Darvish and Alex Wood. That alignment is the same as what manager Dave Roberts set in the Dodgers' three-game sweep of the Arizona Diamondbacks in the NL Division Series.

The Cubs will start Jon Lester in Game 2. He started Game 2 of the division series and added 3 2/3 innings of relief in Game 4 on Wednesday. Kyle Hendricks will get the start in Game 3 and Jake Arrieta in Game 4.

"I'm not worried about it," said Lester, who threw 51 pitches in Game 4 against Washington. "It's kind of just work in between [starts]. Just got to do it in the game, as opposed to on the side. I don't think it's a problem. This time of year, you have to adjust and figure it out."