DE Bruce Irvin to be released by Raiders 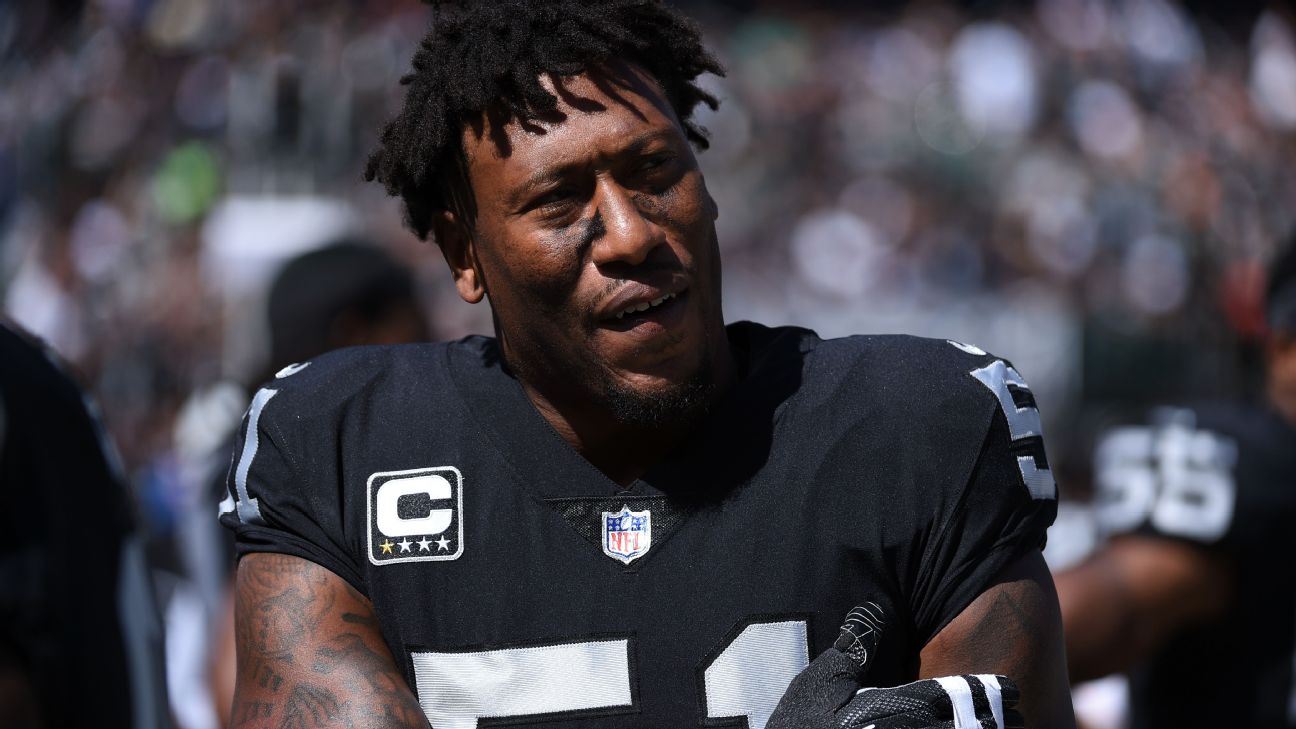 ALAMEDA, Calif. -- The Oakland Raiders have told defensive end Bruce Irvin that they will release him, ending a star-crossed 2-year tenure with the team.

Irvin was not on Saturday's NFL transaction wire, meaning he cannot be released until 4 p.m. ET Monday. Once he is released, he will go on waivers.

Irvin thanked the Raiders organization in a tweet Saturday afternoon:

"We would like to thank Bruce Irvin for his years of service to the Oakland Raiders and we wish him the best,'' general manager Reggie McKenzie said.

Irvin was named a defensive captain before the season but saw his playing time diminish greatly, and he registered only nine defensive snaps in Thursday night's 34-3 loss at the San Francisco 49ers.

He made the switch from outside linebacker this offseason and was a bookend pass-rusher to Khalil Mac, before Mack was traded to the Chicago Bears on Sept. 1.

Irvin, who had a career-high-tying eight sacks opposite Mack last season, struggled as the primary pass-rusher, recording three sacks in eight games, which leads the team. Oakland has a league-low seven sacks on the season.

Irvin rankled some in the organization when he told reporters after the Raiders' 27-3 loss to the Seattle Seahawks in London, "We lost, but I've got a beautiful wife I get to go home to, boy. I'm going to try to make some babies, man."

Under returning coach Jon Gruden, the Raiders have torn down a roster that was thought to have foundation pieces in place to replicate the 12-4 season of 2016, in Mack and Irvin on defense and quarterback Derek Carr and receiver Amari Cooper on offense. Only Carr remains, as Cooper was traded to the Dallas Cowboys on Oct. 22. Plus, veteran cornerback Dominique Rodgers-Cromartie retired last week.

"Well, last night, we weren't in our nickel defense very much," Gruden said. "Remember, we're a 4-3 team, we're not a 3-4. So in the base defense, sometimes he doesn't fit the role that we need done. No disrespect to Bruce. He's an edge rusher. We haven't had a lead. We haven't had the opposition behind in the chains a lot. So his role has been reduced. I know he's frustrated. I'm frustrated. We'll try to solve that as soon as possible. He's a good player. He's a good player."

Irvin, who turned 31 on Thursday, had six tackles on the season, with one for a loss, and one forced fumble.

He had a base salary of $8 million this season, with a salary-cap number of $8.25 million, and was scheduled to make $9 million in 2019, with a cap number of $9.25 million. Next year's salary was not guaranteed, though.

Coming into the season, Irvin took issue with Gruden saying it was rookie defensive end Arden Key's "time" and that Irvin "has to step up" in 2018.

"I just said, 'I think you got it backwards,'" Irvin told ESPN at the time. "'It's Bruce Irvin's time, and Arden Key's got to step up.'