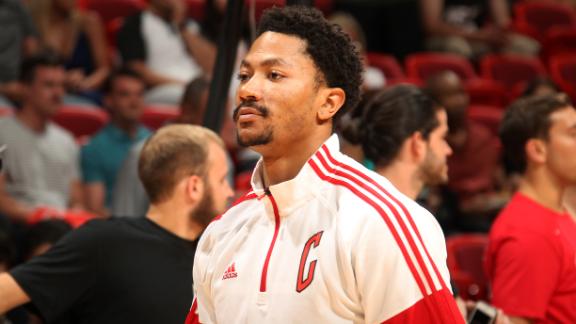 CHICAGO -- Derrick Rose is expected to play some fourth-quarter minutes on Saturday night against the Philadelphia 76ers, which would mark the first time he has done so since returning Wednesday against the Orlando Magic after rehabbing a meniscectomy on his right knee. Rose, who missed almost six weeks after the procedure, has played about 20 minutes per game in his first two appearances since his return.


"We're going to add another segment to it, so we'll see how it unfolds," Chicago Bullscoach Tom Thibodeau said after Saturday's shootaround. "He handled the first two (games), which was good. So we're going to go from there."

Thibodeau said the Bulls will "continue to add as we go along" in regard to Rose's increased workload. Rose is a combined 8-for-24 in his first two games back, but he looked more aggressive going to the rim in a win Thursday nightover the Miami Heat.


"We've talked about that before," Thibodeau said when asked about Rose taking more midrange shots. "We try to back it up more toward when he was playing well right before the All-Star break. And I thought that was the whole key to him getting into a good rhythm again, was he went back to some of the midrange shots. To me, that was his strength coming into the league. So I think what that does is it gives him good rhythm. I don't want a steady diet, but I think a good mix of the attacks to the rim, the midrange shot and then the 3, if he's got the rhythm going and it's coming out of the post or it's dribble penetration or it's weak side, those are good 3s for him. I thought in the Miami game he mixed it up well. And that's what I want. I want him to be aggressive and run the team. Each game, he'll get better and better."


Thibodeau sounds optimistic that Rose will be in a better rhythm once the playoffs begin next weekend and will be able to play even more minutes at that time.


To that point, Bulls center Joakim Noah said he has talked to team personnel and doesn't expect to have a minutes limit in the playoffs.


"We spoke about it," Noah said. "And Coach will be able to do whatever he wants."


For his part, Thibodeau is happy that Noah's minutes restrictions are evaporating, but he acknowledged that Noah would have to earn his time on the floor.


"He has to play well, that's the important thing," Thibodeau said before Saturday's game. "And I didn't think -- his minutes restrictions, it's not a big deal. 32-34 minutes is -- 32 to 34 is a good number for him and I've told him that. But he has to play well, too. We're not just going to put guys out there to put guys out there, you got to play well. So I think it's all good. And if he's playing well and he's in a good rhythm, if he goes to 33-34 [minutes], it's good, it's great. The reason why the restrictions are off is because he feels a lot better so that's a positive."


Saturday's game marks just the fifth time all season that the Bulls' entire roster is healthy and available to play. Swingman Jimmy Butler is expected to play after missing Thursday's game because of a left calf injury.