Doc Rivers says Clippers don't plan on 'trading everybody away' 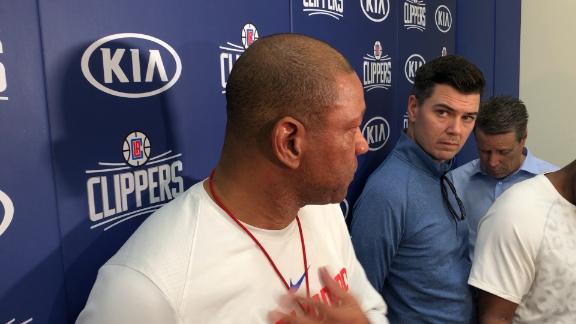 PLAYA VISTA, Calif. -- Despite trading All-Star forward Blake Griffin to the Detroit Pistons on Monday, the LA Clippers are not planning on tearing down the roster and trading away their best players before the Feb. 8 trade deadline, coach Doc Rivers said on Tuesday.

"We make this trade and then everyone thinks we're just trading everybody away. That's not true," Rivers said when addressing the Griffin trade for the first time publicly.

"But that's what's out there. Sometimes you can't control the narrative. You just can control your job, and that's what I have to do."

Though he continuously said the franchise hopes to compete in the short term, president of basketball operations Lawrence Frank took a different stance than Rivers and was hesitant to declare that the Clippers are finished making trades, given the team initially had no intention of trading Griffin until talks with the Pistons materialized within the past week.

"You never know," Frank said. "If you were to ask me the question a week ago whether we were going to trade Blake Griffin, the answer would have probably been different than why we're standing here today. You never know how it's going to unfold with the trade deadline looming. There will be a lot of activity, so we'll see how it plays out."

On Monday the Clippers traded Griffin, Willie Reed and Brice Johnson to the Pistons in exchange for Tobias Harris, Avery Bradley, Boban Marjanovic, and a first- and second-round draft pick. Detroit's 2018 first-round pick include protections on 1-4 in 2018, 2019 and 2020, and the pick is unprotected in 2021, according to ESPN's Adrian Wojnarowski.

The Clippers will continue to explore trade opportunities for All-Star center DeAndre Jordan and guardLou Williams ahead of the trade deadline, targeting young players and draft picks while competing for a playoff spot this season, according to Wojnarowski.

As for whether the Clippers are technically rebuilding now, Rivers said that is up for interpretation and added that the team is balancing multiple objectives.

"Well, I think you'll have to judge that," Rivers said. "Sometimes there's complete rebuilds. We're not doing that. Sometimes you're juggling and trying to create money, and you're still trying to stay relevant and win. I think that's more of us right now."

Back in October, ESPN's Zach Lowe reported that the Clippers presented Griffin with a mock jersey retirement during their July 1 free-agency meeting with him at Staples Center and sold him on being the centerpiece of the franchise moving forward.

So what changed the Clippers' minds over the past eight months?

"Detroit's call. No, really. I mean, it's the truth," Rivers said. "You have to be honest with yourself. We like what we brought together. ... But we were looking at it with all the injuries we're having and all the stuff, and you're looking at the other teams out there and you're comparing yourself.

Frank clarified that the Clippers' decision to move on from Griffin was not health-related, as the franchise wouldn't have signed him to a five-year, $171 million deal if they feared for his long-term health.

Instead, Frank said the franchise identified three priorities it sought in a potential trade, and the Pistons fit all three criteria: remaining competitive in the short term, acquiring young players and draft picks, and creating future financial flexibility.

"When we made the presentation to Blake, we meant every word of it," Frank said. "Blake is one of the greatest Clippers ever. His health was never a concern for us because we have all the information. He's had injuries, but we gave him a five-year max contract. So we believed in his health.

"It was just, for us, we kind of evaluated our team, we know where we need to go, and what we valued, as much as we valued Blake and all of his contributions, we knew there may be a ceiling on the group as presently constructed. And we were going to have to make some hard decisions, and we couldn't be afraid to be bold. We valued the players we were getting back in return; we valued the picks and we also valued our flexibility."