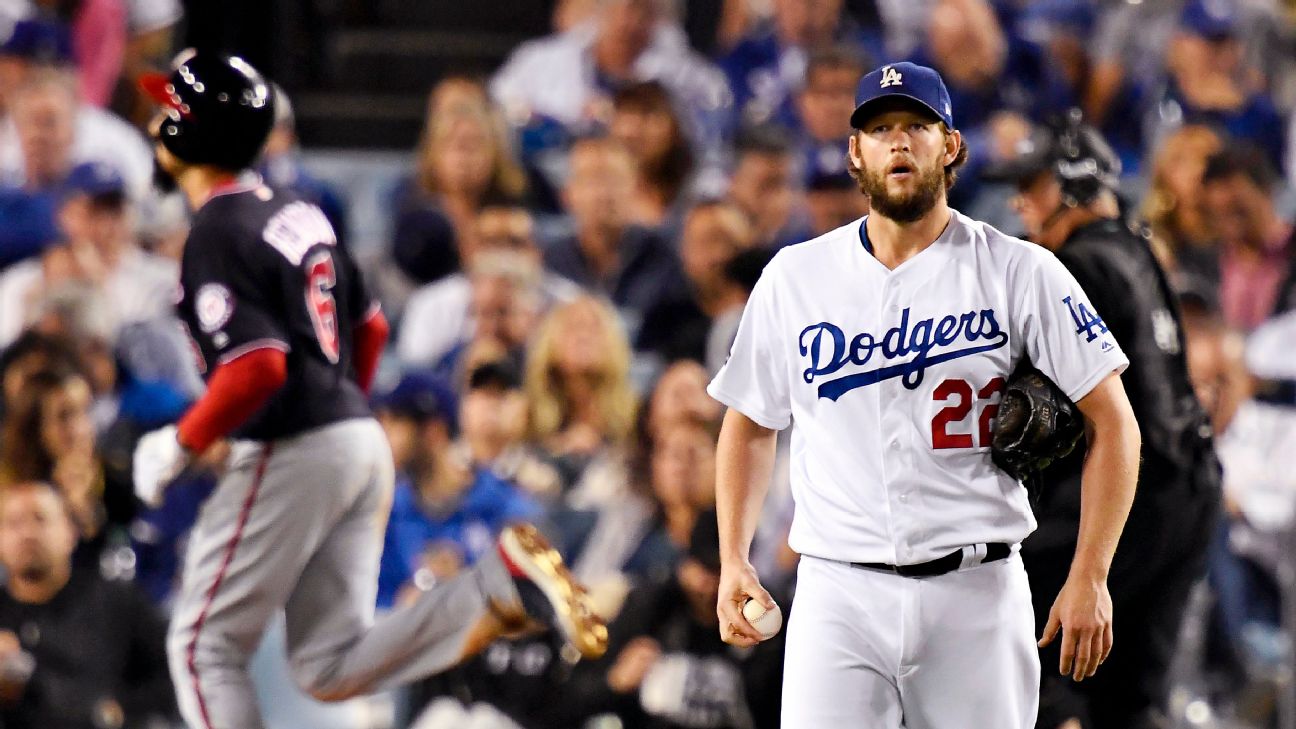 "No," Hill said forcefully, "we wouldn't be here without him."

And then, for nearly 15 seconds, Hill paused, gathering himself, trying desperately to avoid breaking down with the cameras recording him. Hill, a soon-to-be free agent and a soon-to-be 40-year-old pitcher, knows this one will weigh on Kershaw for a while. The agony will extend to the rest of his teammates.

"People say it's just a game," Hill said, pausing once more. "It's a lot more than that."

Walker Buehler, the starting pitcher who exhausted 117 pitches and held the Washington Nationals to only one run over 6 innings, was grieving the death of his aunt when faced with the reality of a longer-than-expected offseason. The 25-year-old right-hander was visibly shaken.

"I've been putting that in the back burner," Buehler said, "and then it ends like this and it's just tough."

Kershaw, who surrendered eighth-inning home runs to Anthony Rendon and Juan Soto on back-to-back pitches, was introspective in the aftermath.

Kershaw was expected to pitch out of the bullpen in Game 5, but his turn didn't come until there were two on and two outs in the top of the seventh and the left-handed-hitting Adam Eaton up to bat. Kershaw, who rarely makes postseason relief appearances with a half-inning still in progress, recorded a strikeout on three consecutive pitches.

Then the trouble began. To lead off the eighth inning, Kershaw threw a 1-0, 89 mph pitch to Rendon that registered as a fastball but could have also been classified as a slider. The offering -- whatever it was -- traveled 381 feet for a home run. The next pitch -- also 89 mph, this one up in the zone instead of below it -- was launched 449 feet by Soto for another home run.

And with that, Kershaw -- his postseason ERA at 4.43, nearly two full runs higher than his career mark in the regular season -- came out of the game, sat on the bench, and hung his head. Two innings later, he watched former teammate Howie Kendrick hit the grand slam that would deny his team a chance at a third consecutive trip to the World Series, extending the Dodgers' championship drought to 31 years.

"Our season, you can put it as a failure," Dodgers utility man Enrique Hernandez said. "Maybe down the road, when all of us retire, we can look back and look at all the records that we broke as a team this year for an historic franchise like the Dodgers. But for us to be one and done, it's tough. And I don't think anyone in this clubhouse expected us to be going home this soon."

The Dodgers had spent the entire summer looking like a special team on the verge of capturing an elusive crown. Cody Bellinger turned himself into a potential MVP and Hyun-Jin Ryu contributed a Cy Young-worthy season. Max Muncy, Corey Seager and Buehler took steps forward. Kershaw, Kenley Jansen and Justin Turner fought the aging curve and contributed to varying degrees. And a slew of rookies -- Alex Verdugo, Will Smith, Gavin Lux and Dustin May among them -- emerged

The Dodgers' offense was a force. Their defense was among the game's best. Their starting pitching was elite. And their depth and versatility went unmatched.

They once again fell vulnerable to the harsh realities of a short series in the postseason, a fate they know too well.

"We all knew what we had," Muncy said. "We know that we're better than what we showed out there. That's how it ends."