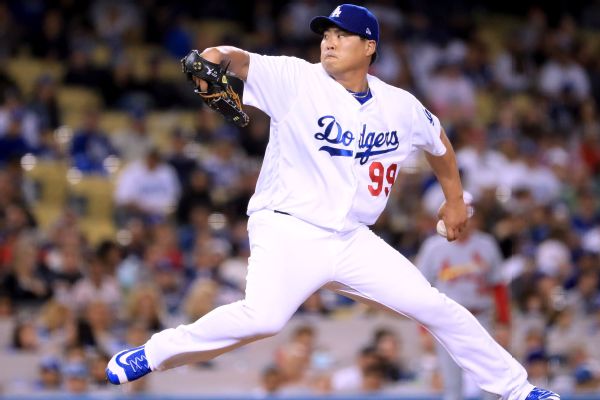 Roberts made the announcement on Thursday before his club worked out at Dodger Stadium on the eve of Friday's Game 1. Wood went 16-3 with a 2.72 ERA during the regular season and made the NL All-Star team.

The selection of Wood means that lefty Hyun-Jin Ryu will be left off the Dodgers' 25-man roster for the series, though he will travel with the team as a member of the "taxi squad" in the event of a major injury. Ryu was 5-9 with a 3.77 ERA during the season. He has made just one career appearance out of the bullpen and Roberts said his discomfort with pitching in that role is what kept him off the roster.

"Although he's had a tremendous season, just seeing the role out of the pen, he's not comfortable with it," Roberts said. "So I think that as we go through matchups and looking at the roster, Alex is the clear choice to start Game 4."

Roberts described the decision to use Wood in Game 4 -- if the best-of-five series goes that far -- as being "set in stone" and added that means ace Clayton Kershaw will not be used on short rest as he has on five occasions during his postseason career.

"Guys don't pitch on short rest in the postseason," Roberts said. "So Clayton is certainly an outlier and to not have to tax him more than he's been taxed in the past, I think that it speaks to what we have on our starting staff, to feel confident, very confident, with Alex taking the ball in the potential Game 4."

Kershaw pitched on short rest twice in last year's playoffs. He got a no-decision against the Nationals in Game 4 of the NLDS, allowing five runs over 6 innings. He then beat the Cubs in Game 2 of the championship series, throwing seven shutout innings.

"Last year was a different year," Roberts said. "And I can't speak to two years ago or years prior with Clayton, but we've assured him that he doesn't need to prepare for going on short rest."

Kershaw said while he's ready for anything, the team's plans do seem to be different this year. Still, his focus is on his assignment on Friday, which is to start Game 1 against Arizona's Taijuan Walker.

"I'm planning on pitching tomorrow," Kershaw said. "I think that's the most important thing for me is to just focus on tomorrow. Usually how that stuff happens is when Game 4 rolls around, things change. But it really sounds like that's not going to happen this year."

Kershaw added that the tough decision his manager faced in choosing a fourth starter is a reflection of the team's talented roster.

"We've got a lot of depth," Kershaw said. "We've said that depth is the key word around here in Dodgers Stadium."

The Dodgers will start lefty Rich Hill in Game 2 and righty Yu Darvish in Game 3. Arizona has not named a Game 2 starter but former Dodger Zack Greinke is slated to start Game 3.