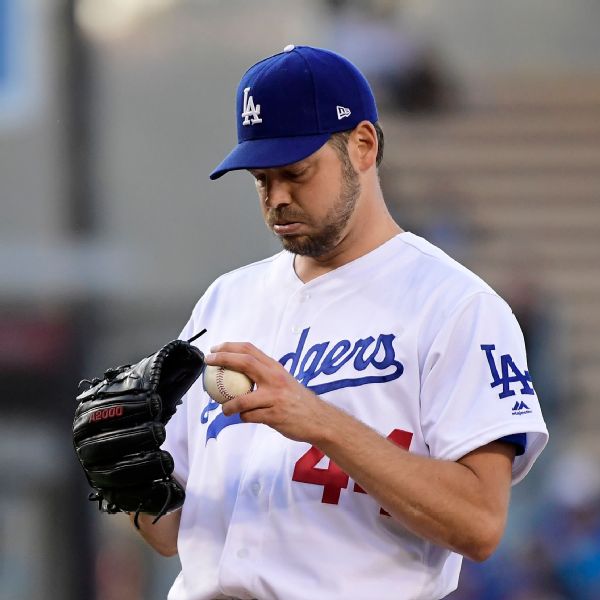 LOS ANGELES -- An MRI on Thursday revealed that veteran starting pitcher Rich Hill is nursing a flexor tendon strain near his left elbow, an injury that will prevent him from throwing for nearly a month and will keep him on the injured list at least into August.

The diagnosis is often a precursor to Tommy John surgery, which at this point would sideline a starting pitcher until the 2021 season. But Hill says he believes he dodged more serious ligament damage and sounded confident in his chances of returning to the Los Angeles Dodgers' rotation in 2019.

"Yeah, I think I'll be able to pitch again this season," Hill said. "Definitely. When that is, I don't have that answer."

Hill exited his Wednesday start against the San Francisco Giants after experiencing tightness in his forearm while warming up for the second inning. A postgame ultrasound gave the 39-year-old left-hander hope that he had avoided a complete tear of his ulnar collateral ligament and an MRI on Thursday morning showed the type of ailment that the Dodgers believe can heal on its own. The technician, Hill said, did not yet know the grade of the strain.

Hill underwent a platelet rich plasma injection to promote quicker healing and estimated that he would have to wait three to four weeks to restart his throwing program, which means the middle of August is probably the earliest he could return to starting major league games.

The Dodgers will initially use a combination of Julio Urias and Ross Stripling when Hill's turn comes up in the rotation, then perhaps settle on one replacement after the All-Star break.

Urias and Stripling both ended up being used in Thursday night's 9-8 win over the Giants.

Urias made his first start since April 18 at Milwaukee, working three innings and giving up one hit while striking out five. He is 3-2 with a 2.84 ERA in 17 appearances, including five starts.

Stripling went two innings in relief and allowed three unearned runs on two hits with a walk and a strikeout. The right-hander has started six games this season and is 3-2 with a 3.08 ERA in 20 games. His last start came on April 25 at the Chicago Cubs.

"Ross is built up more,'' Dodgers manager Dave Roberts said. "It's more potential matchups, innings for Julio, what gives best chance to win, value of each guy in the 'pen, one guy starting."

Roberts reaffirmed Hill's stance that he would return this season, but called it "disheartening" to lose him for a prolonged period.

"Rich is a very driven guy," Roberts said. "But obviously nature's gotta take its course and the healing process has to happen. I expect him to dominate the rehab process, but right now, there's really nothing he can do outside of just let the body heal."

Hill, baseball's oldest active pitcher, underwent Tommy John surgery in 2011 and experienced a late-career renaissance shortly thereafter. Over the past four years, he has compiled 39 wins with a 3.02 ERA in 431 innings. His 2.55 ERA this season ranks eighth among those with at least 10 starts.

Given his age, another Tommy John surgery might end his career.

Hill, in the last year of his current contract, is only thinking about returning before October.

"I'm disappointed, obviously -- not only for myself, but to help this team out," Hill said. "I want to get back as soon as I'm physically able, but not push it where it's obviously going to be nonproductive."