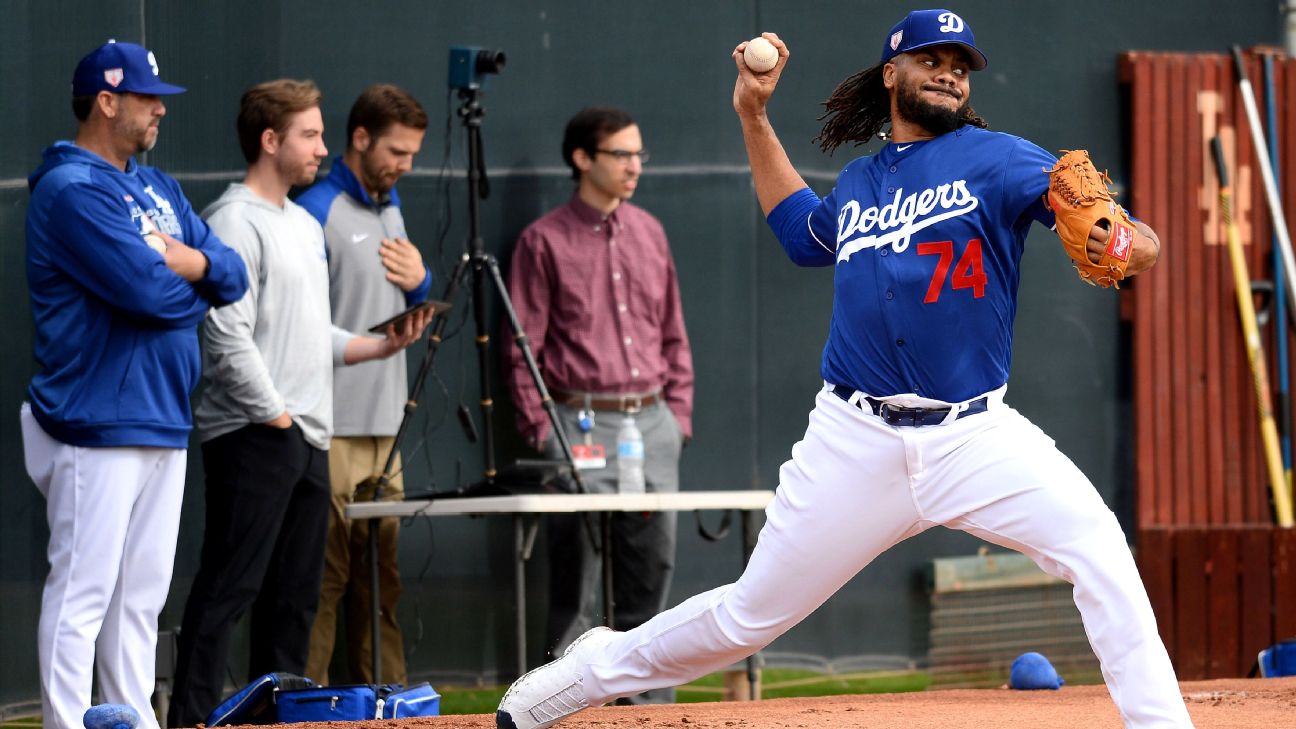 GLENDALE, Ariz. -- Kenley Jansen wore a wide smile in the moments following this past Friday's workout. The Rapsodo tracking devices and high-speed cameras set up throughout the bullpens of the Los Angeles Dodgers' spring training facility had Jansen averaging 2,400 revolutions per minute during his most recent throwing session, far better than what he had identified as his target number in 2019: 2,200 RPMs.

Jansen, coming off what might have been the worst season of his dominant career, has become infatuated with spin rate.

"When I throw my cutter, I can't see what I'm throwing," he said. "By the time it gets out of my hand, I always think I'm throwing a straight fastball, but I can't see it. Just watching it on the computer, it'll show you the spin rate, how it moved. It's very awesome."

Jansen was introduced to the concept of spin rate by celebrated Dodgers pitching coach Ken Howell, who died last November and played a vital role in transitioning Jansen from a catcher to a reliever. Jansen's velocity varied early in his career, but he was still recording outs. Howell explained that it was because of his high spin rate, which helped put Jansen at ease.

Alex Tamin, the former Dodgers executive who is now an assistant general manager with the Atlanta Braves, drove the point home in recent years. But Jansen's curiosity wasn't truly piqued until this offseason, when he began throwing bullpen sessions with a group of minor leaguers at Dodger Stadium, which is now fully equipped with all the tracking technology.

"I think he started getting on it and he started liking it," Dodgers bullpen coach Mark Prior said. "He was able to start making adjustments sooner versus always just trying to feel things, so I think he's taking that into this year and into this spring."

The Dodgers took it slow with Jansen last spring, a precautionary measure to counter the heavy workload of recent seasons. But it backfired. A hamstring strain set Jansen back just as he was preparing to ramp up the intensity, making him unprepared for the start of the season. It led to a 5.59 ERA by the end of April.

This year, Jansen is taking the opposite approach. He threw five bullpen sessions before even arriving in Glendale and has thrown one every other day since workouts officially began in the middle of last week.

"You can't predict how you're going to start," Jansen said, "but at least you ready."

Jansen underwent offseason ablation surgery to repair an irregular heartbeat, his second in six years, then went about losing the weight that would give his heart the best chance to remain healthy. The 31-year-old shed 25 pounds and a shirt size by cutting carbs and sugar from his diet. He grew to love gluten-free oatmeal and almond milk, learned to replace sugar with cinnamon.

"Overall, I'm good," Jansen said. "The doctor told me, 'You're good to go, don't worry about anything. Go out there, have fun and play hard.' That's all I care about. I know I'm in good hands. I just have to make sure I stay hydrated, eating right, and go out here and compete."

Jansen ironed out some early mechanical issues and posted a 1.27 ERA in 39 appearances from May 3 to Aug. 7 in 2018. Two days later, in the high altitude of Denver, his heart beat out of rhythm, forcing Jansen away from the team for 11 days. Upon returning, he gave up seven runs in his first four appearances, then was mostly up and down for the rest of the regular season. He mowed through the Braves and the Milwaukee Brewers in the first two rounds of the postseason, then sat for the first two games of the World Series and blew saves in Games 3 and 4 against the Boston Red Sox.

The end result: a 3.01 regular-season ERA -- nearly double what he carried the previous two seasons -- and another final-round disappointment.

"Let's be honest -- he was an All-Star last year, but it was kind of an up-and-down year from health, from performance," Prior said. "He had some moments when he was lights-out, and obviously he had some moments that didn't go the way he would've liked to. I think he's very determined to get back into that 2017 form, and you can see it. There's a little bit more of a laser focus this year."

ESPN's statistical database, which might differ from what the Dodgers carry internally, had Jansen with an average spin rate of 2,302 RPMs in 2017, ranked fourth among the 274 pitchers who compiled at least 60 innings. In 2018, Jansen's RPMs dropped to an average of 1,867, ranked 61st.

Jansen wasn't worried about those numbers before.

"He didn't need to be," Dodgers president of baseball operations Andrew Friedman said. "It was elite -- don't mess with it."

Prior seeks the ideal combination of bite and rise from Jansen's cutter, characteristics that were far more prevalent throughout 2017. It's already showing up, and Prior has become impressed with how quickly Jansen can make adjustments to get it there. His spin rate was a little lower during his first official bullpen session last Wednesday, so Prior talked to him about slightly tweaking the grip on his cutter and Jansen complied.

Two days later, Jansen threw a bullpen session that he said topped out around 2,600 RPMs and averaged only a little less than that.

"And you gotta remember -- I'm only throwing a bullpen right now," Jansen said. "The intensity is not there."

Jansen isn't sure if he reached 2,400 RPMs at any point last season.

To him, it no longer matters.