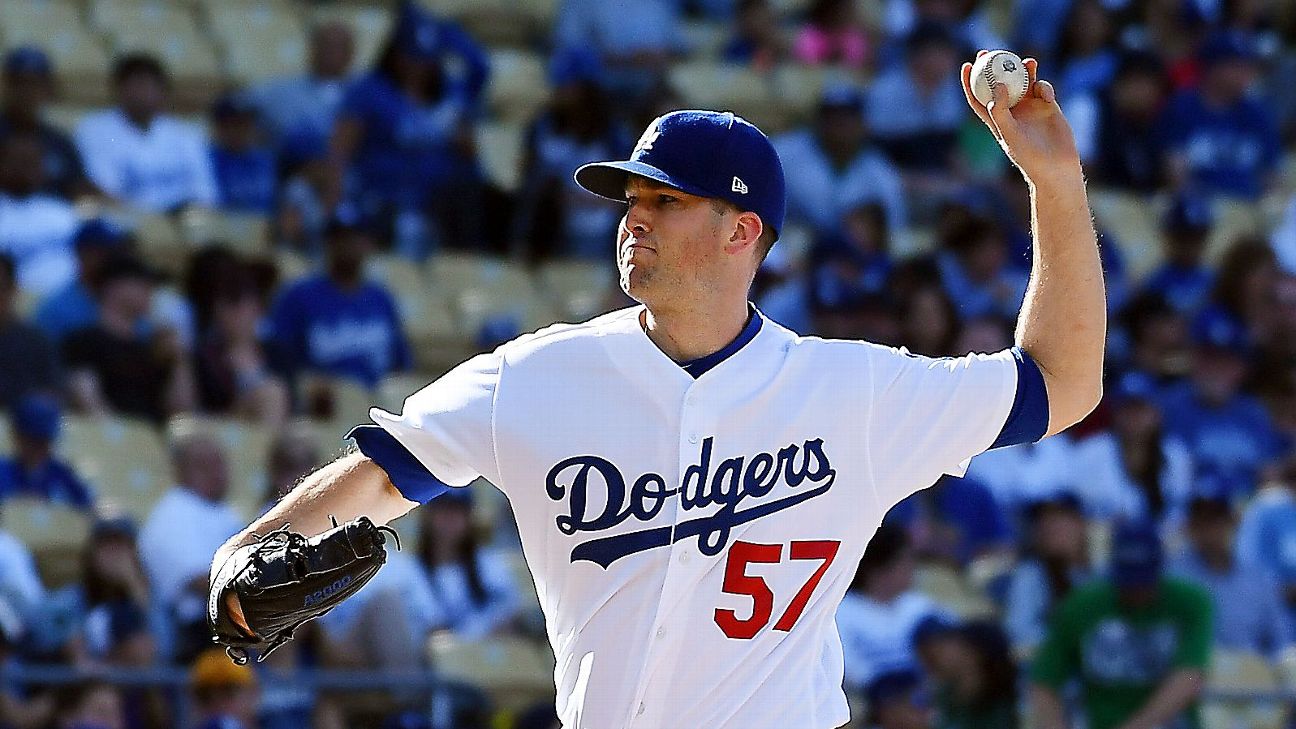 Alex Wood was placed on the injured list Tuesday, making him the fourth Los Angeles Dodgers starting pitcher to be ruled out since baseball resumed.

The Dodgers replaced him on the 30-man roster with minor league reliever Josh Sborz.


Wood's injury, listed as shoulder inflammation, comes one week after Clayton Kershaw's back stiffened up, an ailment that ultimately kept him out of his Opening Day start. Before that, Jimmy Nelson underwent back surgery and was ruled out for the year, and David Price chose not to participate in the 2020 season because of health concerns.

Dennis Santana and Tony Gonsolin stand out as the lead internal options to replace Wood in the rotation, which is now down to Walker Buehler, Julio Urias, Ross Stripling and Dustin May. Kershaw, who threw a bullpen session in Houston on Wednesday and was scheduled to throw another one in Arizona on Thursday, could return this weekend but is not expected to take the ball on Friday.

Wood, who rejoined the Dodgers with a one-year, $4 million contract this offseason, gave up three runs and allowed six baserunners in three innings against the San Francisco Giants on Saturday. The 29-year-old left-hander was limited to seven starts with the Cincinnati Reds last season because of back issues.


Dodgers manager Dave Roberts said Wood had been experiencing some semblance of shoulder inflammation for a couple of weeks and continued to do so after his 2020 debut. The Dodgers also realized that Wood had been dropping his arm slot, an indication that Wood was compensating for pain. Roberts didn't provide a timetable, but said he should return "soon."

"This is not anything that's serious," Roberts said. "It's just something that popped up and we feel good that he'll be back to throwing the baseball the way he was and be healthy."
Report a correction or typo
Related topics:
sportsespnnewsmlbjimmy nelsonalex woodclayton kershawlos angeles dodgersdavid price
Copyright © 2022 ESPN Internet Ventures. All rights reserved.
TOP STORIES
9-year-old swimmer goes missing in Lake Elsinore, prompting search
LA County sees rise in COVID hospitalizations
Target, Walmart weigh paying you not to bring back unwanted items
$1.4 million Powerball lottery ticket sold at Glendale gas station
At least 6 dead, 200 injured after stands collapse during bullfight
Heat prompts concern as Jurupa Valley brush fire chars 110 acres
There are many ways to eat healthy amid high food prices, experts say
Show More
22 people were found dead in a South African tavern: police
Heat advisory in effect for most of SoCal until Monday night
Biden: G-7 to ban Russian gold in response to Ukraine war
CHP investigating possible 110 Freeway shooting in South LA
Congress extends school lunch waivers, but not all kids will benefit
More TOP STORIES News