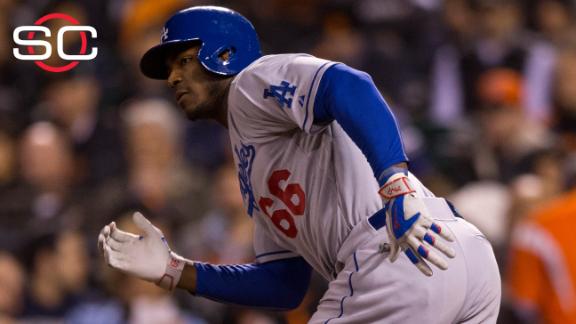 SAN DIEGO -- The Los Angeles Dodgers put Yasiel Puig on the 15-day disabled list due to a tight left hamstring before Sunday's game at Petco Park, marking the first time the mercurial outfielder has been on the DL in a career spanning three seasons.

Puig, 24, aggravated the injury trying to beat out a ground ball to third base Friday night. He first injured his hamstring April 13 and had been in and out of the lineup since then. Puig tried testing the injury by running on the field and hitting in the indoor batting cage.

"I think he's disappointed, because he thinks he's going to be ready to play in four or five days," Dodgers manager Don Mattingly said. "That's the tough part. Being ready to play and being 100 percent are different. Yasiel plays at one speed. I think we see that. There's no real putting the governor on him. He's just going to play at that speed. It's tough for him to say, 'Hey, you've got to back off.' That's where you've got to protect him from himself."

Puig was batting .279 with two home runs. He will be replaced in right field most days by veteran Andre Ethier, who has been the subject of trade rumors for years, but has gotten off to a hot start, batting .353 with five extra-base hits in 34 at-bats.

The team also put veteran reliever Joel Peralta, 39, on the DL because of a dead arm resulting from a sore upper back and recalled Carlos Frias from Triple-A Oklahoma City. Frias will be in the Dodgers' bullpen for a day or two at least, but he is also a candidate to replace Brandon McCarthy in the rotation starting Friday.

McCarthy left Saturday night's start with right elbow pain after allowing his third home run of the game. He has an MRI and doctor's exam scheduled for Monday. The Dodgers already have Hyun-Jin Ryu on the DL with a left shoulder injury. Ryu threw his first bullpen session since he injured the arm in spring training and said the session went well, but he is considered at least three weeks away from returning.