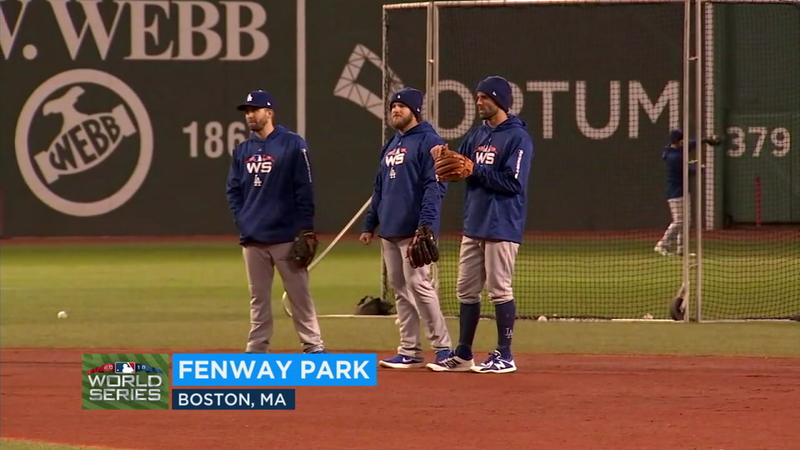 BOSTON (KABC) -- The Dodgers face the Boston Red Sox as the 2018 World Series opens at Fenway Park Tuesday. Here's a look at matchups and keys to the game.

STARTING PITCHERS
It will be a battle of the lefties as Clayton Kershaw will start for the Dodgers, even though he threw 15 pitches in relief in Game 7 of the National League Championship Series on Saturday. The 11-year veteran has never pitched at Fenway Park, the oldest stadium in the league.

Chris Sale takes the mound for the Red Sox. He missed his last scheduled start in the American League Championship Series after he was hospitalized with what the team called a "stomach illness." He says he's back to 100 percent.

MATCHUPS
Kershaw faces off against the Major League's best offense, headlined by likely AL MVP Mookie Betts who hit for a .346 batting average that included 32 home runs, 80 runs batted in and 129 runs to go along with 30 steals in the regular season.

THINGS TO LOOK OUT FOR
Dodgers manager Dave Roberts is sure to receive a warm ovation at Fenway. He's still a fan favorite in Boston for his daring stolen base that sparked an unprecedented comeback from a 3-0 deficit against Mariano Rivera and the rival Yankees in the 2004 ALCS. That series was followed by the Red Sox winning their first World Series since 1918.

Both teams have plenty of depth and will platoon at several positions to gain favorable matchups. The Dodgers have a number of quality options for designated hitter in the American League park, including David Freese and Matt Kemp against the left-handers at the top of the Boston rotation.