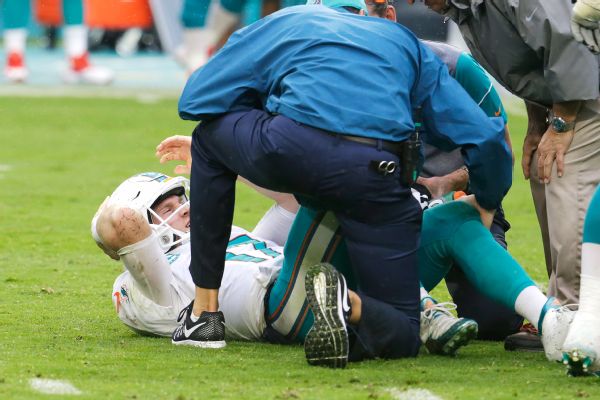 MIAMI GARDENS, Fla. -- The Miami Dolphins are bracing for the worst with starting quarterback Ryan Tannehill, who injured his left knee in Sunday's 26-23 victory over the Arizona Cardinals.

Tannehill was hit low late in the third quarter by Cardinals defensive tackle Calais Campbell and was knocked out of the game.

Backup quarterback Matt Moore replaced Tannehill and threw for 47 yards and produced the game-winning drive that resulted in the final field goal.

Several people in the Dolphins' organization, including Moore and head coach Adam Gase, embraced Tannehill in the locker room after the game. Tannehill did not address the media Sunday and exited Hard Rock Stadium on crutches.

Gase confirmed the team is concerned that Tannehill tore his left ACL.

"We don't have it officially yet, but it doesn't look good," Gase said.

The feeling in the locker room is the offense will be turned over to Moore down the stretch as the Dolphins (8-5) try to complete their push for the playoffs. Moore was one of several players offering Tannehill words of encouragement.

"I told him I loved him and, you know, regardless of what his situation is, this team needs you," Moore said of his conversation. "He agreed and said, 'I'm there. Let's go win one game at a time.' I know he was shaken up."

Before the injury, Tannehill was one of the NFL's most durable quarterbacks. He hasn't missed a start in five seasons. Tannehill threw for three touchdowns against the Cardinals before getting hurt.

Moore helped Miami finish the game and complete the win over the Cardinals to stay in the playoff chase. He's thrown just 16 passes in the past four seasons.

The Dolphins will travel to play the New York Jets next week.

Tannehill leaves game on a hit to his knee
Ryan Tannehill fell to the ground holding his knee after a low hit by Cardinals DT Calais Campbell in the third quarter, forcing backup Matt Moore to enter the game.