Don Mattingly expects to be back 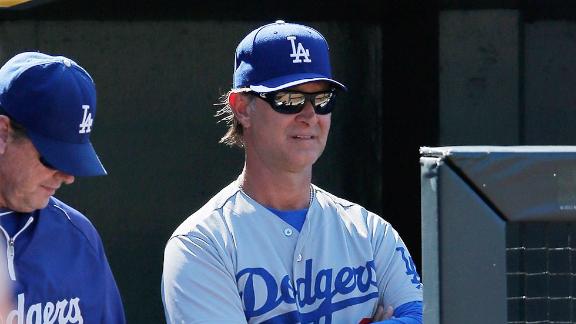 LOS ANGELES -- Dodgersmanager Don Mattingly, who signed a three-year contract extension last winter, said Thursday he expects to return in 2015 and that he would be surprised if general manager Ned Colletti wasn't retained, as well.

Dodgers president Stan Kasten had a meeting planned with Colletti on Thursday afternoon and said he wouldn't comment on any potential personnel changes until early next week.Unlike the previous two seasons, Colletti didn't speak to reporters after the first day of organizational meetings.

"I came to work today like every other meeting," Mattingly said. "Nobody's told me anything differently,"

Both the manager and GM are believed to be under intense scrutiny after the Dodgers entered the 2014 season with a major league-record $235 million payroll and bowed out in the NL Division Series. Some people within the organization seem to feel that Mattingly's position is more secure than Colletti's because of repeated breakdowns in the Dodgers' bullpen, which Colletti was unable to improve at the trade deadline. Kasten said he wanted to get through the meetings before commenting.

"I think we all expected to be playing still," Kasten said.

Mattingly rejected the notion that it was "World Series or bust" for the Dodgers this year, a premise his ace, Clayton Kershaw, endorsed during an August radio appearance.

"'World Series or bust' is kind of tough," Mattingly said. "I don't mind the mentality but then again you have to have reality, too, I think, where you get unemotional and say, 'Were we good enough? Did we play good enough?' Any time you get into the postseason, you get into short series and you get into anything can happen."

Mattingly said the one strategic move he regretted during the team's NLDS matchup with the St. Louis Cardinals was letting left-handed reliever Scott Elbert face Yadier Molina leading off the seventh inning in Game 3. Molina doubled and later scored onKolten Wong's home run offElbert, who had pitched just 4 1/3 innings for the Dodgers in the regular season. The Cardinals won that game 3-1.

Dodgers relievers allowed a key home run in every game but the last, which the Cardinals won after rallying for three runs off Kershaw in the seventh inning. The Dodgers lost to the Cardinals as well in 2013, losing in six games of the NL Championship Series. After that series, Mattingly and Colletti both spoke at an end-of-season news conference. It turned awkward when Mattingly used the venue to complain about entering 2014 on a one-year contract. The team finalized his extension in January.

"I'm proud of what we've accomplished this year," Mattingly said Thursday. "You always hear the talk of the payroll and stuff. To me, this is part of a building process for us. This was a different season from last year. Even looking at the playoffs, I don't think we made an error in the series. They got the key hit, made the key pitch. We didn't get the key hit or make the key pitch. We got beat. We didn't beat ourselves. The year before, we were throwing the ball all over. This year, we got beat."

Whether or not he stays with the Dodgers, it promises to be a busy offseason for Mattingly.

The 53-year-old said Thursday that he and his wife, Lori, are expecting their first child together, a boy, in December. They married nearly four years ago.

Mattingly also has three grown sons from his first marriage.