Doug Martin takes over as Raiders' starting RB: 'Still have a lot of miles left' 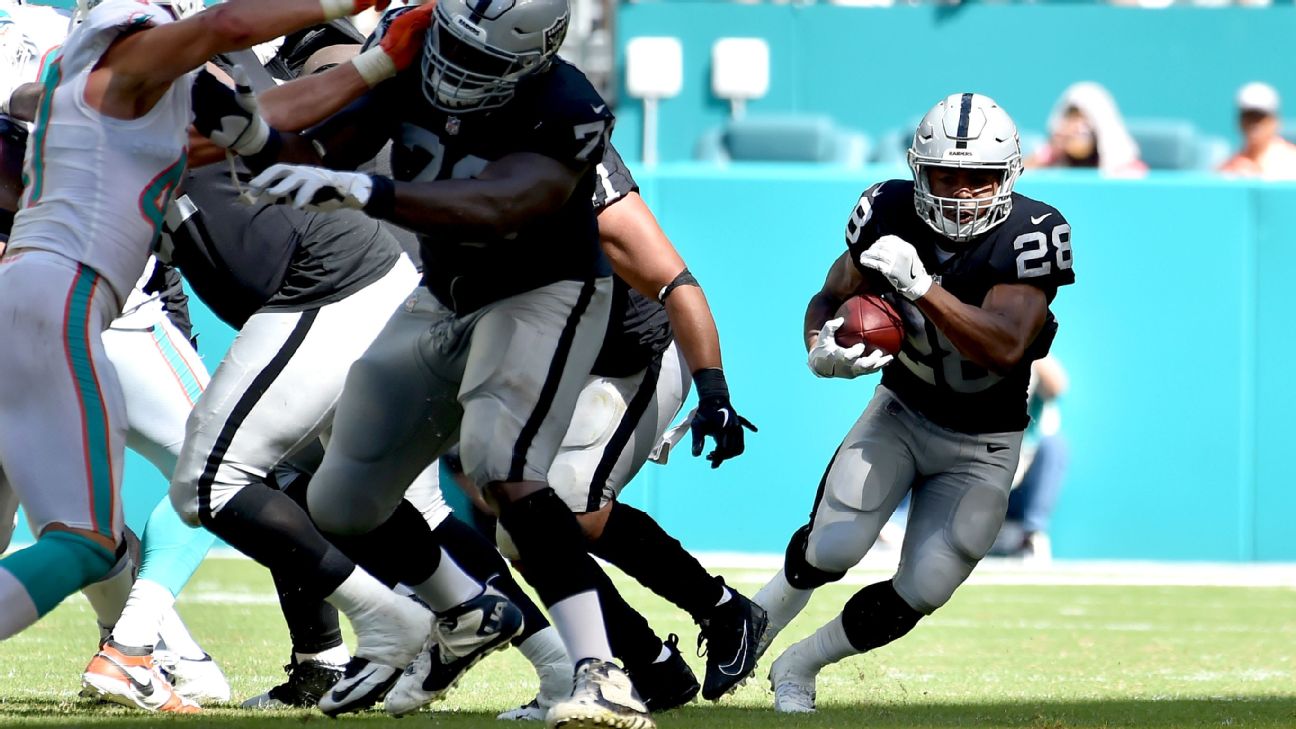 ALAMEDA, Calif. -- Doug Martin had been a starting running back in the NFL since entering the league in 2012. He has rushed for more than 1,400 yards twice, gone to two Pro Bowls and been named first-team All-Pro once.

Coming off an NFL bench to assume a starter's role, as he will for the Oakland Raiders on Sunday against the Indianapolis Colts? This is new.

"I've been a lead guy ... so it was definitely something that was difficult for me," Martin said Thursday of being a backup, three days after Marshawn Lynch was put on injured reserve because of a groin injury.

"But I've got people behind me, in my ear, telling me to keep working hard and keep pushing and your time will come. And, it's this week. ... There's only one running back on the field, and as a running back, you want to have that rhythm. So this week, I hope we get a little more rhythm."

Signed to a one-year, $1.475 million free-agent contract with a base salary of $850,000 after six star-crossed seasons with the Tampa Bay Buccaneers -- he rushed for 1,454 yards as a rookie with 12 total touchdowns, including a 251-yard outburst with four scores against the Raiders, but has played a full 16-game schedule only once since, when he had 1,402 rushing yards with seven TDs in 2015 -- Martin has struggled with the backup role to Lynch.

With only three first downs on 31 offensive touches for Oakland this season, Martin has the lowest such percentage of any player in the league with at least 30 touches, according to The Associated Press.

And while he is averaging 3.7 yards per carry on 27 attempts, Martin's 3.0 average over the past three seasons is the lowest of any back with at least 150 carries in that time.

Not that Raiders coach Jon Gruden is sweating it. At least, not publicly, and not with Lynch out but the Raiders having traded away another offensive weapon in receiver Amari Cooper this week.

"What a great opportunity for Doug Martin," Gruden said.

Raiders offensive coordinator Greg Olson said Oakland was fortunate to have Martin backing up Lynch and that Martin still possesses the speed he flashed early in his career.

"He's a real high-energy guy," Olson said of Martin. "If you ever watch him on the practice field, he's constantly moving. If it's the special teams period, he's over with the quarterbacks running routes or working on protections. He's just trying to improve his game all the time. He's a real high-energy guy. I think he's being a real pro and he'll wait patiently until his opportunity comes, and it's here now.

And while Olson said Martin still showed the speed he had early in his career, the back has had trouble not going down early. Martin averaged a league-low 0.06 forced missed tackles per touch in 2017, according to Pro Football Focus. This season, he ranks 54th at 0.07.

Still, Martin sent Lynch a message, that he, Jalen Richard and DeAndre Washington would "hold it down" for him at running back.

"I'm 29, pushing 30," Martin said. "I signed over here for a year so it's definitely an opportunity to show the rest of the league and the Raiders and all my doubters that I can still play.

"I still have a lot of miles left on these wheels."

Martin played in a combined 19 games the previous two seasons, averaging 2.9 yards per carry while getting slapped with a four-game suspension at the end of the 2016 season that extended into 2017 for violating the NFL's substance abuse policy, reportedly for Adderall.

With the trades of Cooper this week and edge rusher Khalil Mack on Sept. 1, the Raiders' focus has changed from competing to rebuilding since Martin signed in Oakland. He insists that will not change his focus.

Not even with the Raiders sitting at 1-5.

Like he did early in his college career at Boise State.

It was there that Martin was actually being used on defense by the Broncos' coaching staff.

"We had a lot of running backs and a running back ended up tearing his ACL and they asked me to come back over and the rest is history," Martin said. "I've been in this situation before and I'm just glad I have this opportunity."
Report a correction or typo
Related topics:
sportsespnstarerbackupnfloakland raidersdoug martin
Copyright © 2020 ESPN Internet Ventures. All rights reserved.
More Videos
From CNN Newsource affiliates
TOP STORIES