Ducks flying through the first round with balanced scoring depth, good goaltending 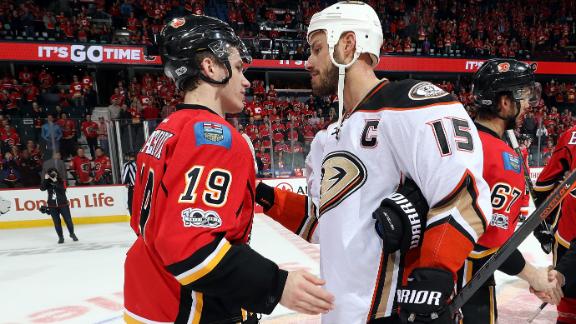 What makes the Anaheim Ducks such a strong Stanley Cup contender?

Pierre LeBrun: What doesn't get talked about as much is how late in the season the Ducks found offensive balance up front. Look at Wednesday night: Nate Thompson centeredRickard Rakell and Corey Perry. The other top lines had Selke Trophy candidate Ryan Kesler and series MVP Ryan Getzlaf as centers. Faceoff magician Antoine Vermette centered the fourth line. Talk about a matchup nightmare for the Calgary Flames. The Ducks have the goods to go deep as long as the goaltending of John Gibson holds up.

Craig Custance: To me, it's Getzlaf. When he plays like one of the top centers in the game, like he seems to do every postseason, the Ducks are at another level. He certainly eases himself into the regular season, but he's clicking now with five points in the Ducks' sweep of the Flames.

Scott Burnside: What's been impressive to me has been the play of the youngsters on the blue line. Without the injured Cam Fowler, who is coming off a renaissance season, Shea Theodore has risen to the challenge and is averaging 20:08 in ice time and has five points. The last couple of years have seen lots of ups and downs for the Ducks' top players, but Kesler is the favorite to win the Frank J. Selke Trophy and Getzlaf has been a beast, collecting five points. Playing without the pressure of being the heir apparent to the Chicago Blackhawks and Los Angeles Kings in the Western Conference has been a bonus.

Joe McDonald: The Ducks are playing solid hockey at the right time. In addition to strong goaltending, for a team to contend for the Stanley Cup, it needs all four lines and all six defensemen making contributions. Anaheim is getting all of the above, which bodes well for its chances in the West.