Ducks to be without Ryan Getzlaf after surgery on cheekbone 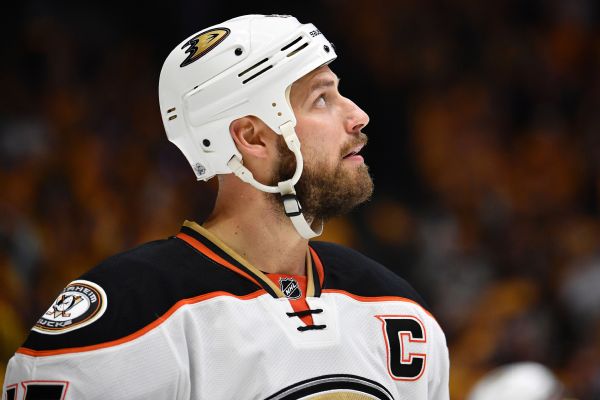 Anaheim Ducks center Ryan Getzlaf underwent facial surgery to repair his cheekbone, and the team announced on Tuesday that the star captain's recovery will take up to two months.

Getzlaf suffered the injury to his cheekbone on a freak deflection against the Carolina Hurricanes on Oct. 29, as a pass attempt from teammate Corey Perry was knocked away by forward Sebastian Aho, and the puck bounced off the left side of Getzlaf's face near the Carolina crease. He finished the first period but did not return to the game.

He was placed on injured reserve on Oct. 31.Getzlaf, a 13-year veteran, does not wear a helmet visor.

Getzlaf, 32, has one goal and six assists for seven points in just six games this season for the Ducks (6-6-2), as he's been plagued with injuries. He missed five games after suffering a lower-body injury in the preseason. After playing two games, he was back on the shelf for three more for the same ailment.

Injuries have been the story of the season so far for Anaheim. Defenseman Sami Vatanen (offseason labrum surgery) just returned to the lineup, as did goalie Ryan Miller (wrist injury). Defenseman Cam Fowler is expected to miss more than a month with a knee injury. Defenseman Kevin Bieksa is out with a left hand injury. Center Ryan Kesler is recovering from hip surgery and out until December. Winger Patrick Eaves is out indefinitely after being diagnosed with Guillain-Barré syndrome, a rare autoimmune disorder in which the body's immune system attacks the central nervous system. He's expected to make a full recovery.

"There's no feeling sorry for yourself," Ducks coach Randy Carlyle said after Getzlaf's injury. "There's nobody in the league who is going to feel sorry for you. Everybody has to deal with injuries at their own time."

Getzlaf's injury, coupled with Kesler's, leaves the Ducks perilously thin at center. Rickard Rakell, who moved from the wing after Kesler's injury, has assumed the top center spot, in front of rookie Kalle Kossila, veterans Antoine Vermette and Derek Grant as well as checker Dennis Rasmussen.