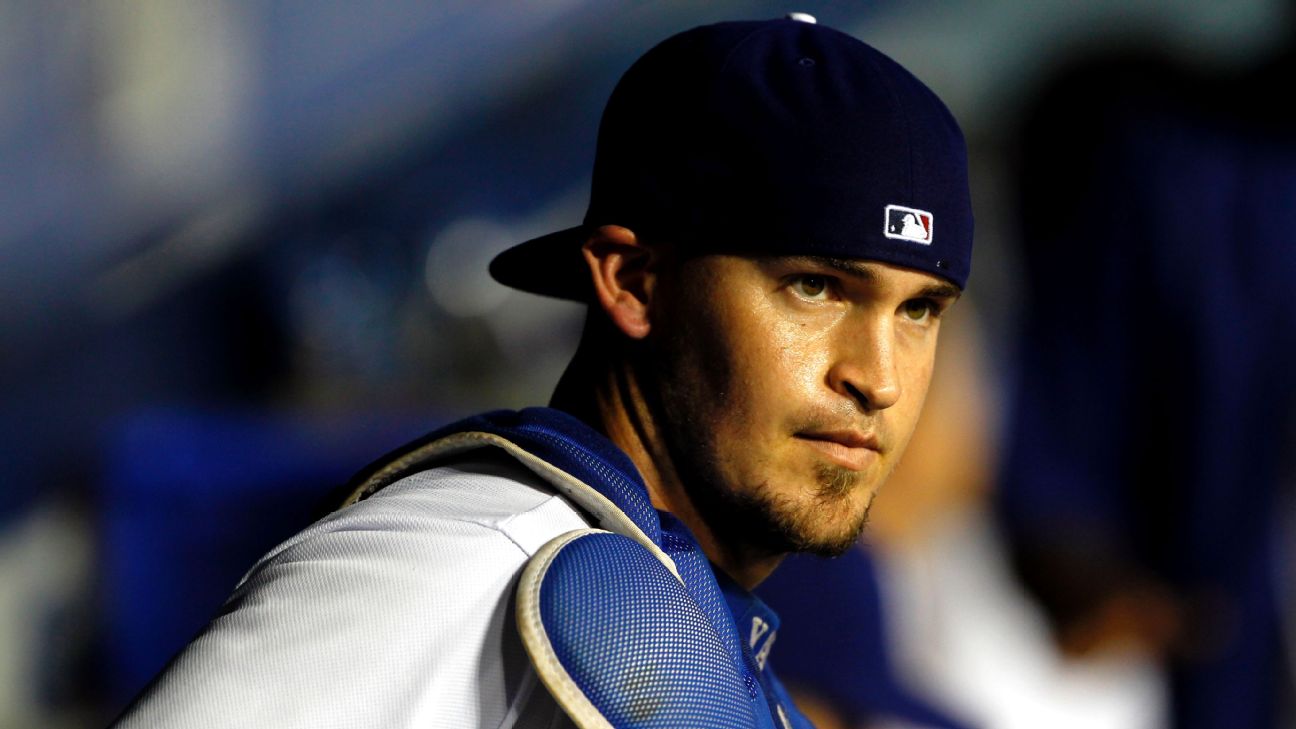 Grandal allowed his third passed ball in two starts in the series and also couldn't corralWalker Buehler's sixth-inning breaking ball in the dirt (scored a wild pitch) that allowed infielder Travis Shaw to score the Brewers' second run. At the plate, Grandal struck out three times, the last one coming with one out and the bases loaded in the ninth inning.

A sold-out crowd booed Grandal throughout the night.

At one point, a smattering of them began "We want Austin!" chants as a plea for Barnes to replace him, which teammate Enrique Hernandez did not appreciate.

"It sucks that there's nothing going on in the stands, since the first inning when [Ryan] Braunhit that double, the stadium's kind of quiet for the rest of the evening," Hernandez said. "And it sucks that they got loud just to show up Yasmani. He's trying his best. Catchers have a lot going on."

In Game 1 of the NLCS, Grandal became the first catcher in postseason history to commit two errors and allow two passed balls, a feat pulled off within the first three innings. Roberts used him only in a pinch-hitting role in Game 2, which resulted in an inning-ending double play with the bases loaded and the Dodgers down by one in the seventh.

Asked repeatedly about the wild pitch that led to a run in Game 3, Grandal said: "I think it's driving you guys nuts more than it's driving me."

"I think any person in baseball understands what it is to be able to block a ball like that," he added. "I don't really hear the noise outside."

The calls for Barnes came after Grandal's passed ball, which allowed Braun to advance into scoring position in the eighth inning (though he ultimately did not score). It was Grandal's 28th passed ball since the start of last season, which trails only the New York Yankees' Gary Sanchez for the major league lead.

"He had a tough night, and obviously the fans voiced their opinion," said Roberts, whose team now trails 2-1 in the series. "And they're passionate. They want to win. They want the best out of all of us, especially in the postseason."

Hernandez wasn't quite as accepting.

"If they think that they can do it, then go ahead, put on your gear and go catch 99 with breaking balls that have a lot of movement," Hernandez said. "He's been one of the best catchers in the game for a while now. He's having a little bit of a rough patch, which we all -- as humans, as baseball players -- go through."

Grandal is also struggling mightily in the batter's box, where he is now 7-for-68 with 30 strikeouts for his postseason career. Roberts said he sees Grandal getting "a little too anxious" in high-leverage situations, and Grandal admitted to venturing outside the strike zone a little too frequently.

"I've been known for three things -- taking care of my pitchers, getting on base and slugging," Grandal said. "I need to get back to that."

Barnes replaced Grandal when he slumped down the stretch last season, ultimately starting 13 of the Dodgers' 15 postseason games. Grandal, a free agent at season's end, bounced back to turn in a solid regular season in 2018, sporting an .815 OPS and 24 home runs in a career-high 140 games.

He might be getting pushed aside again, though Grandal dismissed that notion, saying: "Even in the days that I'm not playing, I have a huge part in what goes into what I do, especially scouting-report-wise. It's been like that all year."

The Dodgers went 0-for-10 with runners in scoring position and mishandled several balls in play, outside of Grandal's blunders.