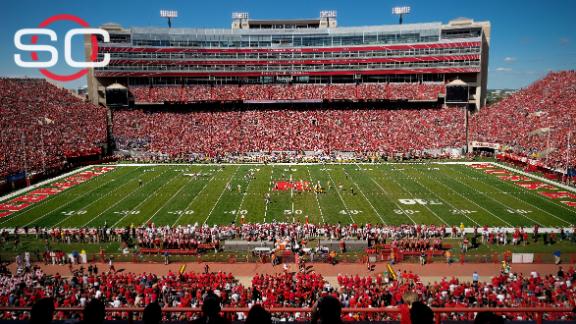 LINCOLN, Neb. -- A months-old Facebook post has cost theNebraskafootball stadium announcer his job one day after his hiring was announced.

Jon Schuetz said Tuesday that a university official told him he was let go because of a Facebook post critical of the firing of football coach Bo Pelini last November. Schuetz said he has deleted the post and declined to comment on what it said.

"They were correct to do it," Schuetz said of his firing. "I own it. It should be a lesson to everybody: be very careful what you say on social media."

The university has named Lane Grindle the Memorial Stadium announcer starting with Saturday's game againstBYU. Grindle has worked as a radio sideline reporter for the Husker IMGSports Network.

Grindle becomes the third man in a month to hold the job. The school on Aug. 6 fired its longtime public address announcer, Patrick Combs, after he was arrested on suspicion of bilking hundreds of thousands of dollars from two elderly women.

Schuetz's voice is well known in the state. He had worked more than 15 years as an Omaha sportscaster and 24 years overall in local television. He left TV in 2010 and works in private business in Omaha.

Screen shots of the post began appearing online shortly after Schuetz's firing was announced. It was dated Nov. 30, the day Pelini was fired, and took aim at chancellor Harvey Perlman for his handling of former athletic director Steve Pederson, whom he fired in 2007.

It wasn't clear how the university discovered Schuetz's Facebook post. The university said in a statement that it was made aware of the post on Monday. It read: "Harvey Perlman is as [sic] disgrace. Remember this was the guy who extended Steve Pederson's contract only to fire him a few months later. When will he be held to account."

"After reviewing the post, highly critical of university leadership and, after thorough internal discussion, we visited with Jon, who was extremely apologetic and agreed with our decision that he cannot represent the university in such a public capacity," the university statement said.

Schuetz said he felt badly that the athletic department had to find a new announcer so close to the first game.

"There were people who went to bat for me to get me into the mix for this," Schuetz said. "I feel like I let them down."