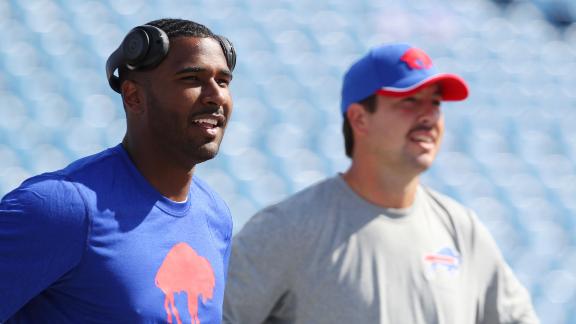 Fisher was adamant throughout the pre-draft evaluation process that he didn't believe Manuel had the tools to be an NFL starter and he shouldn't be any better than a third-round pick, according to sources.

Fisher refuted this report in a statement released Sunday afternoon.

"I'm not sure why ESPN's Adam Schefter would not reach out to me to get my thoughts on EJ Manuel or check the accuracy of his report. I never made those comments about EJ. I spoke to [former general manager] Buddy Nix of the Buffalo Bills and told him EJ is an outstanding young man and player. He was the face of our organization and would be a great one for them. I did not speak to any other teams, general managers or head coaches about EJ."

The Bills selected Manuel with the 16th overall pick in the 2013 draft. He has started 14 games for the Bills since being drafted, posting a 6-8 record.

According to sources, Fisher was extremely positive about Manuel as a person and as a hard worker, but he was very open and honest with teams about how limited he felt Manuel was as a quarterback prospect.

He also told teams, according to sources, that even if Manuel were eligible to return for another season, he had a redshirt freshman quarterback he had been developing, who was waiting in the wings -- a player by the name ofJameis Winston.

Veteran Kyle Orton will make his first start for the Bills on Sunday against the Detroit Lions.