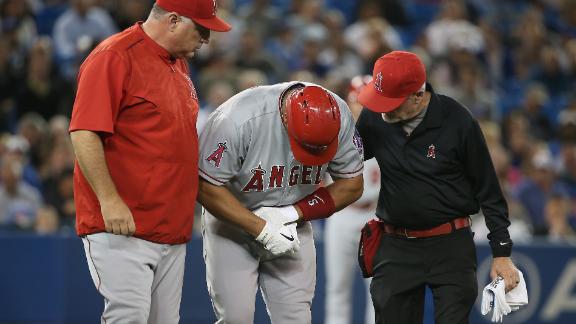 TORONTO -- Albert Pujols is out of the Los Angeles Angels' lineup Thursday night in Toronto, a day after bruising his left hand when he was hit by a pitch.

Pujols left the game Wednesday night in the fifth, one inning after being hit by Toronto Blue Jays right-hander Drew Hutchison. X-rays were negative, but Pujols was unable to grip a bat because of pain and swelling. The slugger said he was unable to feel his fingers.

Although the swelling had reduced considerably, manager Mike Scioscia said Pujols was still sore and would not take batting practice Thursday. Pujols, who's batting .231 with seven homers and 15 RBIs, hopes to return Friday when the Angels begin a three-game series at Boston.

Marc Kraussstarted at first base and batted second in the series finale against R.A. Dickey and the Blue Jays. Krauss went 1-for-4 with a solo home run in the Angels' 8-4 loss.