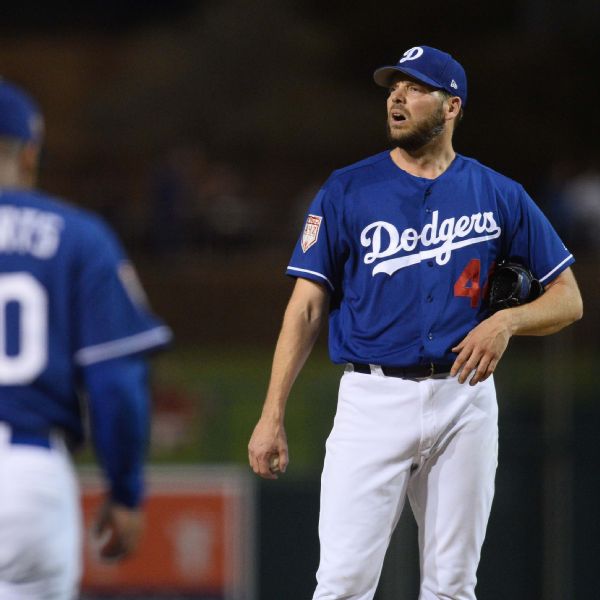 GLENDALE, Ariz. -- Rich Hill's accelerated spring training plan is on schedule, which might be even more significant than anticipated given the uncertainty of the Los Angeles Dodgers' starting rotation.

To avoid repeating his slow 2018 start, Hill took an aggressive offseason approach, including throwing three bullpens, before reporting to camp on Feb. 12. Consequently, he's already appeared in three Cactus League games, striking out seven, walking none, and posting a 1.42 ERA.

His performance Wednesday night against the Indians was typical: no runs, three hits, four strikeouts and no walks.

The fourth-year Dodger, who turns 39 on Monday, has a 3.91 ERA over a 14-year career. In three of his five starts last April and May, he was hit hard and his ERA soared to 6.32, prompting a new approach.

"You want to get as deep as you can before games actually start counting," he said. "A lot of time you want to say, We have time in spring training.' But really, we don't. Spring training is almost over, if you look at the calendar. We've gotta get really ramped up and focused for the 2019 season."

With the possibility that ace Clayton Kershaw will not be ready for the March 28 season opener because of shoulder soreness that stalled his progression and the "slow play" of Walker Buehler in deference to protecting his young arm, Hill might initially end up at the top of the rotation.

"The decision isn't up to me, so hopefully, all those guys get back and are healthy because like I said, the season's right around the corner and we need to get off to a good start," he said.

Hill played catch with Kershaw on Tuesday and saw Buehler's bullpen on Wednesday.

"Walker looked great. And I know Clayton is making really good strides, so there's a lot of positive stuff going on," he said.

When asked about the situation Thursday, Dodgers manager Dave Roberts said, "For both of those guys, we're not worried about opening day. We are worried about getting those guys ramped up. When the time comes, we'll see where we're at. So, to speculate right now, it just doesn't make a whole lot of sense."

"I think it is the same really, his fastball and curveball have the same characteristics," Barnes said. "His energy and the way he competes is a little bit different from everybody."

Kershaw threw with closer Kenley Jansen on Thursday morning, demonstrating an ability to throw on consecutive days as he progresses from the shoulder soreness that shut him down earlier in camp. Kershaw moved back to approximately 130 feet, from which he lofted crow hopped throws, before gradually moving closer to Jansen with increased velocity. Kershaw also threw from a pitching distance to a crouching catcher. Kershaw has declined to discuss his shoulder or his pitching. ... SS Corey Seager stayed home from camp for the second consecutive day because of an illness and missed his first planned appearance in a minor league exhibition. Seager is working his way back from Tommy John surgery and arthroscopic hip surgery. ... There is no update on a timeline for the arrival of OF Andrew Toles, who is indefinitely absent from camp for personal reasons. ... LHP Donnie Hart was claimed off waivers from Baltimore and RHP Josh Fields was designated for assignment.
Report a correction or typo
Related topics:
sportsespnrich hilllos angeles dodgers
Copyright © 2022 ESPN Internet Ventures. All rights reserved.
TOP STORIES
New California laws on bars, ghost guns, schools taking effect
Free gas giveaway leads to massive traffic jam in Compton
Minimum wage in LA increases to $16.04 starting Friday
Here's what to know about the end of CA's eviction moratorium
California late start law aims to make school less of a yawn
LA County could hit 'high' COVID level in July, prompt return of masks
2nd visitor in 3 days gored by Yellowstone park bison
Show More
Hit-and-run driver slams into woman walking her dogs in Westminster
LAX expected to be second busiest US airport over July 4th weekend
Family member beats shark to free teen girl from its jaws
Growing solar industry creating pathway out of poverty for many
California sets nation's toughest plastics reduction rules
More TOP STORIES News